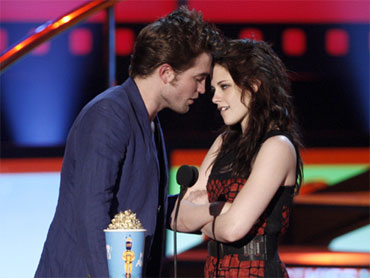 Film fans will choose the nominees and winners of the 2010 MTV Movie Awards.

Viewers of the irreverent awards show can log on to movieawards.mtv.com beginning at noon EDT Monday and submit their choice nominees in 13 categories. Submissions will be accepted until April 9.

Any 2009 film or performance is eligible for consideration in categories including best villain, best fight and best kiss.

MTV added three new categories to the competition this year, and the titles of two are so racy they can't be printed here. The two unmentionables are action- and horror-related. The third is best global superstar, and for the first time in MTV Movie Awards history, voting in that category will be open worldwide.
B
Last year's new category, best WTF moment, is returning for the 2010 awards.

Fans will also pick the winners of the show's golden popcorn trophy by voting online from May 11 to June 5.

The 19th annual MTV Movie Awards will be presented June 6 at the Gibson Amphitheatre, in Universal City. Voting for the top prize, best movie, will remain open throughout the live show.