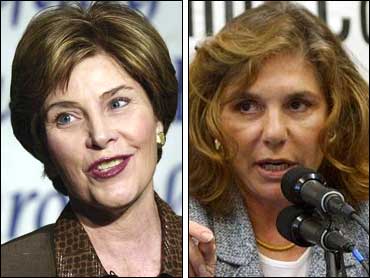 Teresa Heinz Kerry has apologized for telling a newspaper she didn't know if Laura Bush had ever held "a real job." She said she forgot about the first lady's 10-year stint as a schoolteacher and librarian.

In an interview published Wednesday, USA Today asked the wife of Democratic candidate John Kerry how she would be different from Laura Bush as a first lady.

"Well, you know, I don't know Laura Bush. But she seems to be calm, and she has a sparkle in her eye, which is good," Heinz Kerry said. "But I don't know that she's ever had a real job — I mean, since she's been grown up. So her experience and her validation comes from important things, but different things."

Heinz Kerry said she sees her age as a benefit — she is 66 and Bush 57. "I'm older, and my validation of what I do is a little bit bigger — because I'm older, and I've had different experiences. And it's not a criticism of her. It's just, you know, what life is about," she said.

Laura Bush worked in public schools in Texas from 1968 to 1977, the year she married George W. Bush.

In a statement issued Wednesday, Heinz Kerry said: "I had forgotten that Mrs. Bush had worked as a school teacher and librarian, and there couldn't be a more important job than teaching our children. As someone who has been both a full-time mom and full-time in work force, I know we all have valuable experiences that shape who we are. I appreciate and honor Mrs. Bush's service to the country as first lady and am sincerely sorry I had not remembered her important work in the past."

Earlier in the day, Karen Hughes, an adviser to President Bush, criticized Heinz Kerry's remarks as "indicative of an unfortunate mind-set that seeks to divide women based on who works at home and who works outside the home."