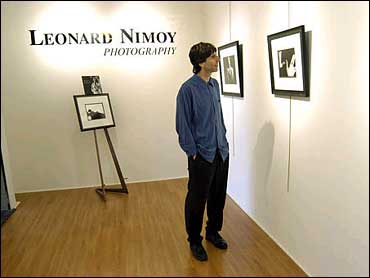 The women appear aglow; black and white images bathed in light. Some are nude, others are loosely covered with translucent robes or Jewish prayer shawls.

They are Leonard Nimoy's embodiment of Shekhina — the feminine presence of God.

Best known as Mr. Spock in "Star Trek," Nimoy left the screen to pursue other interests — most notably, photography.

In 2002, he published "Shekhina," a book of about 40 photographs that explore his interest in the feminine aspects of Jewish divinity. Many of the images are on display this month at the R. Michelson Galleries in Northampton.

It's an idea that was planted with Nimoy when he was about 8, although he didn't fully realize it until a few years ago. During a segment of high holiday services at his Orthodox synagogue in Boston, members of the congregation stood before the assembly to deliver a special blessing. Standing with his brother, father and grandfather, Nimoy was told not to look at the men as they chanted the prayer.

But he took a peek, and saw the men swaying with their arms outstretched and their hands splayed in the manner he would later use as the Vulcan greeting in his "Star Trek" role. The hand symbol represents the first letter of a Hebrew word for God.

"These gentlemen are up there in a fervent, singsong, swaying presentation," Nimoy said. "It was like a revivalist meeting. The entire congregation had their eyes covered. But I was entranced by it."

For decades, Nimoy didn't know why the congregation was not supposed to look as the blessing was being given. A few years ago, he finally asked the rabbi at Temple Israel of Hollywood, the reform synagogue he now attends.

"There's a legend that the Shekhina — the feminine aspect of God — comes in to bless the congregation," Nimoy said. "But the light from the Shekhina could be overwhelming and you could not survive it, so you shouldn't look. I was taken by that when I heard the explanation."

With his collection of photos, Nimoy probes his understanding of Shekhina. Using professional models, actresses and dancers — not all of whom are Jewish — as well as his wife, Susan Bay Nimoy, he sought subjects who possessed "an inner life."

"I needed models who could bring the sense of spirit to life," he said. "They needed to bring vitality."

But his use of nude and partly clad female models donning a tallit and tefillin — Jewish prayer accessories traditionally worn by men — has ignited controversy in some parts of the Jewish community.

"Shekhina" was banned from a Jewish book fair in Detroit last year, and Nimoy's appearance at a fund-raising dinner for the Jewish Federation of Greater Seattle was canceled shortly after the book was published.

But his photos have been well received at many Reform synagogues and at art galleries and museums around the country.

In Northampton, a liberal college town that's home to the all-women Smith College, a line of people snaked out the gallery door when Nimoy attended the exhibit's opening May 2.

"This is a perfect place for his work," gallery owner Richard Michelson said. "This is an area with a lot of liberal Jews who are interested in what he's doing and his approach to the feminine side of spirituality."

While Michelson attributes the jam-packed opening to Nimoy's celebrity, he said people walked away from the exhibit more impressed with Nimoy the photographer than with Nimoy the Vulcan.

"I was a bit surprised about how little talk there was about 'Star Trek' and how much people were focused on his pictures and his approach to Judaism," Michelson said.

"The Shekhina Project" closes May 31 and will not travel.