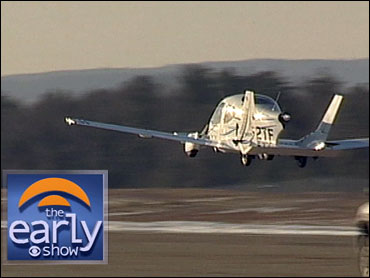 How many times have you been stuck in traffic and dreamed of being able to just have your car take off and fly over it?

Well, the future is almost now.

A flying car made by Woburn, Mass.-based Terrafugia has already been cleared for use on roads by the company's home state, and the process of getting it OK'd for use in the air is well under way, Terrafugia says.

The car/plane, dubbed the Transition, is the brainchild of Terrafugia founder Carl Dietrich, who brought one to The Early Show plaza Thursday to show weather anchor and features reporter Dave Price, who happens to have a pilot's license.

The Transition can go from drive to fly in 30 seconds -- that's how long it takes for its wings to extend and lock into place, as Dietrich demonstrated for Price.

If all goes as planned, the Transition will be on the market by the end of 2011.

To fly it, someone would need a minimum of a light sport plane pilots license, which basically allows you to fly a plane weighing less than 1,350 pounds.

Terrafugia says about 40 people have plunked down a $10,000 refundable deposit toward the $194,000 purchase price.

The Transition needs 1,700 feet to take off, the company says.

It runs on regular unleaded gas, has a steering wheel -- and pilot's telescopic stick, with rudder peddles on either side of the gas and brakes.

CBSNews.com partner CNET provided this video of a scale model of the Transition flying: