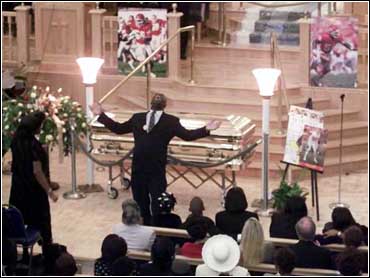 Among the 750 mourners at the United House of Prayer for all People were Thomas' mother, Edith Morgan, four sisters, five brothers, some of his seven children and current and former NFL players, including Thurman Thomas, Bennie Blades, Ryan McNeil, O.J. McDuffie, Cornelius Bennett and Neil Smith.

Thomas, a nine-time Pro Bowl linebacker, died at 33 in Miami on Feb. 8. He was paralyzed two weeks earlier when his Chevrolet Suburban skidded on an icy highway near Kansas City and flipped several times.

Mourners filed past Thomas' gold-plated coffin bearing the inscription "Derrick Vincent Thomas, KC 58." Floral arrangements included a rose-clustered Chiefs helmet and a bouquet that read, "Bama 55," the number he wore while setting records at Alabama from 1985 to 1988.

"This is a great loss for us all," Clinton said. "Hillary and I hope you can take comfort in this difficult time in the knowledge that Derrick's life, character and achievement has won him a lasting place in football history and in the hearts of millions of fans."

Perhaps the most emotional moment came while Thomas' younger sister, Taneathia Morgan, sang the inspirational "I Won't Complain," a song she dedicated to her brother for not complaining after his accident. Family members sobbed during the song.

They paid tribute to an athlete who overcame a difficult inner-city upbringing and the death of his father in Vietnam to become a civic leader active in charity.

Hunt, choking back tears, remembered that former President Bush once tabbed Thomas as one of his points of light.

"He'll always be a shining light in our hearts back in Kansas City, and to is family and to those young people he helped to read, he's a shining light,"' Hunt said.

Taylor jokingly complained that he tired of being compared with Thomas.

"He came to me and said, `Mr. Taylor, I want to be like you,"' Taylor recalled. "Pretty soon my coaches used to say, `Who's that guy in K.C.? He's looking pretty good.' I admitted that guy was pretty good."

University of Alabama President Andrew Sorenson announced that Thomas will be posthumously granted a Bachelor of Arts degree, with a major in criminal justice, despite being 15 credits short.

Some 23,000 fans paid tribute to Thomas in Kansas City on Monday.

"I made a statement last week in Kansas City that a light had gone out," Peterson said. "I need to correct myself. The light merely dimmed, flickered for a moment and them came back on, and it's shining brighter and bigger today than ever. That light is the spirit and the smile of Derrick Thomas."