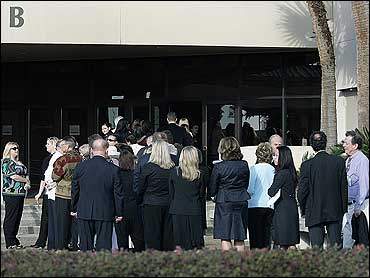 Hundreds of mourners remembered slain Florida toddler Caylee Anthony in a music-filled service Tuesday, months after her mysterious disappearance inspired dozens of volunteers to search for her body before and after her mother was charged with killing her.

"There are days you don't know what to say and these are one of these days," said Pastor David Uth, who offered a "prayer of peace" for Casey Anthony, who was in the Orange County Jail less than a mile away, facing a first-degree murder charge. She has pleaded not guilty and claims a baby sitter kidnapped Caylee.

Images of the girl, who was 2 when she disappeared, flashed on a giant screen in front of the First Baptist Church of Orlando sanctuary as a pianist played, "You Are My Sunshine" and "If You're Happy and You Know It." A video montage of her jumping on a bed and dressed like an Easter bunny ended the service.

Casey Anthony could have asked for permission to watch the memorial broadcast live on TV but didn't, according to jail officials. The 22-year-old said in a statement read by her attorney that she missed Caylee "every day and every minute of every day."

"It breaks my heart today that Casey isn't here today to honor her child who she loved so much," Cindy Anthony said during the eulogy. "Casey, I hope you're listening to this. I wish I could comfort you. I wish I could take away your pain and wipe away your tears."

Thousands of mourners had been expected, but only several hundred people showed up, including many who never knew Caylee or her family. They included Jessica Smith, who drove 160 miles from West Palm Beach with a co-worker to attend, saying she felt compelled to be there "to say our prayers for her."

Caylee disappeared in June, but her mother didn't report her missing until a month later, telling authorities she was looking for her. Caylee's remains were found in December in woods near her home, about two months after prosecutors brought charges against her mother.

Casey Anthony also said in her statement that she wished the service would have been private and not open to the public and media.

"I still don't want a public event with cameras and everybody around for Caylee's service, but I can't stop my parents from doing what they want," she said. "I truly hope that it will help them."

George Anthony said his daughter deserved love and letters of support while she was in jail.

"I miss my daughter, Casey," George Anthony said. "Do not form judgments because I tell you, you do not want to be in any of our shoes."

Security was tight, given that the Anthony family had faced protesters at their house before the daughter was arrested. A dozen deputies were stationed at the church and mourners had to pass through a metal detector to get into the sanctuary. No protesters showed up.

Some mourners said they felt a connection to Caylee since they had been following the case since she was reported missing.

"I had hoped she would have been found alive," said Justine Lorence, 22, who drove up with Smith from West Palm Beach. "I feel like I have to pay my respects to her because I've been watching this from the start."