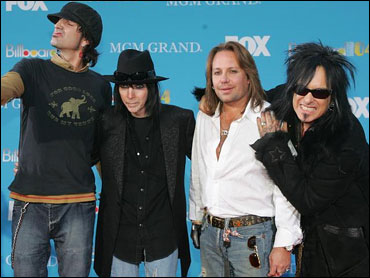 Motley Crue is suing one of the band's managers for more than $20 million, claiming he pushed drummer Tommy Lee into doing two disastrous reality shows that took him away from the group and forced the cancellation of dozens of concerts.

The suit filed Monday in Superior Court claimed fraud and breach of fiduciary duties against Carl Stubner and a company called Sanctuary Group.

A call seeking comment from Stubner, who works for Sanctuary, was not immediately returned Tuesday.

Stubner is one of the band's three managers and also is Lee's manager, according to a copy of the lawsuit obtained by the TMZ.com Web site.

The suit claimed that beginning in 2005, Stubner and Sanctuary got Lee involved in "bad career moves" including the short-lived reality TV show "Tommy Lee Goes to College."

The show was "a ratings disaster" that portrayed Lee as "incoherent, lazy and incompetent," disruptive in classes and unable to keep a beat in a school marching band, according to the suit.

Another failure was "Rock Star: Supernova," the suit said.

The suit contended that the TV shows were part of a "self-serving scheme" to promote Lee's personal work at the expense of the group because Stubner got a higher commission for solo projects.

Stubner didn't make him available for a 2006 European tour, forcing Motley Crue to cancel 40 concerts at an estimated $8 million loss in ticket and merchandising sales, the suit said.

The suit also contends that Stubner also demanded 100 free tickets for Motley Crue shows that he resold at "scalper" prices, according to the suit.