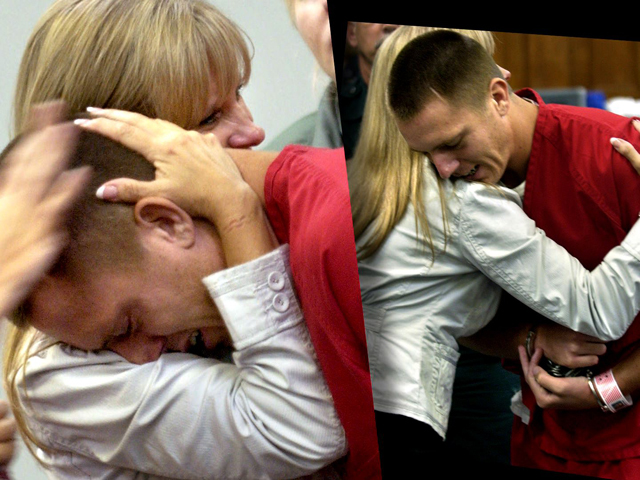 (CBS News) TALLAHASSEE, Fla. -- Not many convicts consider themselves blessed, but Eric Smallridge does, and for good reason. He's getting out of prison -- way early.

In 2003, Eric, of Tallahassee, Fla., was found guilty of two counts of DUI manslaughter. While driving at twice the legal limit for alcohol, he hit a car carrying Lisa Dickson and Meagan Napier, both 20, killing both girls instantly. He got 22 years for the crime, which sounded just about right to Renee Napier, Meagan's mom.

"I felt like our system had served us well and justice had been served. I definitely felt that," Renee says.

But a few years later, a woman came forward and asked the judge to reduce Eric's sentence by half. She claimed Eric was truly sorry for what he'd done and deserved leniency. The judge obliged -- partly because of what she said, but mostly because of who she was.

Renee's 180-degree shift began with the single turn of a single phrase. First at Eric's sentencing and later in a letter, Renee told Eric she'd forgiven him, even though, at the time, she hadn't -- not really. At trial, Eric had actually been pretty defensive and unapologetic.

"I could hate him forever and the world would tell me that I have a right to do that," Renee says. "It's not going to do me any good, and it's not going to do him any good. I would grow old and bitter and angry and hateful. ... In my opinion, forgiveness is the only way to heal."

She says it did heal her -- almost as much as it healed him.

"It was like a burden," he says. "It was a weight off my chest. I no longer had to hide behind this facade."

Following the forgiveness, Eric apologized repeatedly and profusely -- in private and in public -- to the families of both girls. Eventually, Lisa's parents forgave him, too, which only inspired Eric to atone even more.

While still in custody, Eric agreed to speak at high schools with Renee, telling kids, as only they can, the consequences of drinking and driving. They both plan to continue doing this even after Eric's release.

"I'm going to go to wherever we need to go to spread this message, because I don't believe it's about us anymore," he says.

This week Eric Smallridge was released from custody into the arms of his parents -- his mom so grateful that she actually hugged the guard first.

It's a happy ending that would have never existed without forgiveness. Because of that one powerful word, tonight he is free. And so is she.