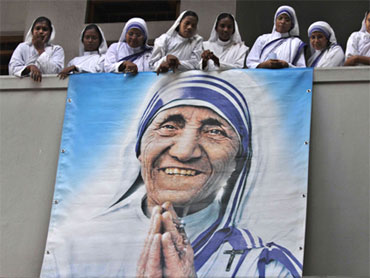 Hundreds of nuns, bishops and volunteers attended a Mass on Thursday marking the 100th anniversary of the birth of Mother Teresa, the selfless nun who dedicated her life to serving the sick and poor in India.

School children, tourists and volunteers, some carrying bunches of flowers or candles, also crowded Mother Teresa's grave in the headquarters of the Missionaries of Charity, the order of nuns she founded in 1950 in the eastern Indian city of Calcutta.

Special feasts to feed the poor, a festival of films on her life and work, the launch of a new train called the Mother Express, and interfaith prayer meetings were among events planned to mark the yearlong anniversary.

"Her life and work continue to be an inspiration for the young and the old, the rich and the poor, from all walks of life, religions and nations," said Sister Mary Prema, the nun who now heads the Missionaries of Charity.

In a message read out at the Mass, Pope Benedict XIV described Mother Teresa as an "inestimable gift" and said "this year will be for the church and the world an occasion of joyful gratitude to God."

India's government plans to release a coin in Mother Teresa's honor. Indian Railways is launching the Mother Express, a blue and white train, like the colors of the saris worn by the Missionaries of Charity, that will travel around the country carrying an exhibition on Mother Teresa.

She died in 1997 after a lifetime spent caring for hundreds of thousands of destitute and homeless poor in Calcutta, for which she came to be called the "saint of the gutters."

The Vatican beatified Mother Teresa in 2003 and the Roman Catholic Church has fast-tracked the process of declaring her a saint.

The Missionaries of Charity believe that God "will choose His own time for this holy event," Sister Prema said Thursday.

In Albania, hundreds of Catholics held a Mass to commemorate the centenary of her birth.

Men and women in traditional folk costumes, school children, nuns and bishops filled the courtyard of a cathedral named after Mother Teresa, who was of Albanian origin, in Vau i Dejes, 110 kilometers north of the capital, Tirana.

In Skopje, the capital of neighboring Macedonia, where Mother Teresa was born, Parliament held a special session to pay tribute. A Mass was held in Skopje's main Roman Catholic cathedral.