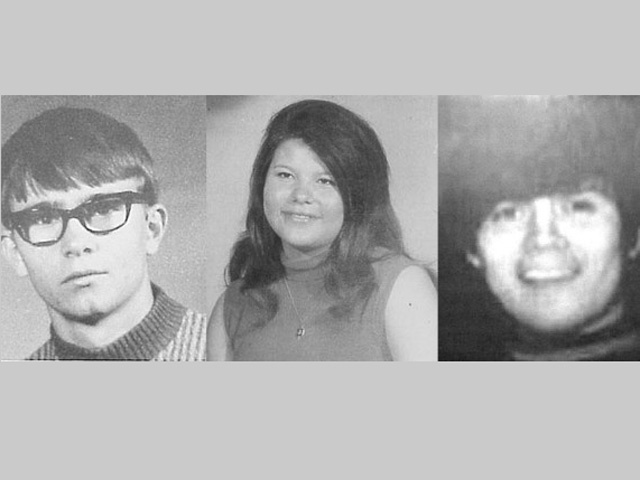 (AP) SAYRE, Okla. - Pearl Guzman always hoped her son would come home after he and two classmates disappeared while driving to a high school football game in 1970, so the distraught mother insisted on staying in her small Oklahoma town for years even though the case quickly went cold.

By the time two rusted vehicles were found in a mucky lake last week, including an old sports car with the remains of three people inside, it was too late for Guzman to learn that the years she stayed in Sayre - blanketing the town with posters, driving to neighboring areas on hunches - her son's grave had likely been a few miles away. She died, her children say, heartbroken in 2010.

"Mom didn't ever want to leave Sayre because she told us if Thomas came back, he'd be looking for us," said Lucia VanZandt, Thomas' sister. "Since we didn't have a body to lay to rest, it was just like he vanished."

Thomas Michael Rios was 18 when he and two friends, Jimmy Williams and Leah Johnson, vanished along with Williams' 1969 Camaro after leaving for a football game on Nov. 20, 1970. When Thomas failed to return that night, his parents assumed he had gone hunting. But hours turned into days, which quickly gave way to panic.

His parents called anyone who may have known their son - old girlfriends, high school buddies, friends 100 miles away in Oklahoma City, from where the family had moved the year before - and drove to talk to many of them. They were desperate for any scrap of information, according to VanZandt and two of her sisters, Linda Childress and Amanda Gusman.

"Everything stopped for us when that happened," said Gusman, who was 16 when her brother vanished.

The seven surviving children soon watched their mother shrink from life. She became quiet and depressed, refusing to get out of bed for days. "She was beside herself. She couldn't cope," VanZandt said.

She said her mother eventually pulled herself out of her near-catatonic state with the help of her strong Christian beliefs.

Yet she was haunted by a seemingly off-the-cuff comment Thomas once made about being able to disappear, if he wanted, in a way that nobody would find him.

"Teenagers say those kinds of things, but mom was holding out for that hope that maybe he had decided to leave town and was alive somewhere," said Childress, who said she was 12 or 13 when her older brother went missing. "They were grasping at straws."

Her parents called police regularly, a duty that fell to their children in later decades. Their calls began yielding little, if any, new information about the case, or even confirmation that investigators were still looking. Then four decades later, the case broke wide open.

Law enforcement officials were testing sonar equipment last week in Foss Lake, not far from Sayre, when they stumbled across two cars submerged side-by-side, about 50 feet from the end of a boat ramp in water just 12 feet deep. A mud-caked 1969 Camaro was recovered on Tuesday, with skeletal remains inside, along with a 1950s Chevrolet possibly containing remains of a woman and two men who disappeared from the area in 1969.

Custer County officials believe the three teens died after Williams' car plunged into the lake. Sheriff Bruce Peoples said both cars easily could have driven off a nearby country road and down the boat ramp.

DNA tests are being done on the badly decomposed bones, but Peoples said he's confident the remains found in the Camaro are those of the three long-missing teenagers.

"We're amazed they were at the bottom of the lake all this time. We couldn't believe they hadn't found that car," VanZandt said, adding that she and her siblings are planning to return to their hometown to see the wreckage next week.

Much of the family had moved away from Sayre by the 1980s, and with the case long cold, Guzman reluctantly moved to Bristow, about 200 miles away in northeastern Oklahoma, her daughters said.

"The grandkids started coming. I guess you kind of - I hate to say give up - but we hadn't heard anything for years," Childress said.

Now, the sisters said, they hope to bury Thomas' ashes next to their mother's grave in Bristow.

"She always wondered what happened to him, where he was," VanZandt said. "I'm sure she's happy now because she knows where he is. We're just glad we got some closure."

VanZandt also noted that another brother, Ray Vasquez, died only nine hours before the family learned the Camaro had been found.

"How God has his way of making things work out it's just really amazing," she said.

The Sayre Police Department doesn't have any records from the 1970s. The sheriff's office in Beckham County, where Sayre is located, was able to provide only a four-page incident report listing each teen's name, age, height, weight, race and date of birth. The three are listed as missing persons. No summary, interview or investigative notes were included.

Peoples, the Custer County sheriff, said the remains are with the Oklahoma medical examiner's office, which will investigate to see if any foul play was involved.

The office said testing could take a few days or a few years, or possibly be inconclusive, depending on DNA samples that can be pulled from bones that may have been submerged for four decades.

Complete coverage of the bodies in Foss Lake on Crimesider