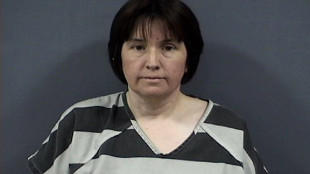 LASALLE TOWNSHIP, Mich. -- A mother is accused of trying to torch a car with her 11-year-old son bound and locked inside at a southeast Michigan cemetery.

According to the sheriff's office, authorities were called to Roselawn Memorial Park by a 50-year-old man who told police he believed his wife might have harmed their son. They also had "additional information" that the family's car was on fire at the cemetery.

The sheriff's office said preliminary investigations show Richter bound the boy's wrists, locked him inside the car and tried to set two fires in the vehicle in the cemetery, which is located about 10 miles northeast of the Ohio state line.

As the boy struggled to free himself, Richter allegedly poured gasoline inside the passenger compartment where he sat, reports CBS Detroit. The fire did not ignite. According to the sheriff's office, Richter let the boy out of the car and the two found a cemetery employee who unbound him.

The boy was taken to a hospital as a precaution and released. He was treated for minor injuries, the station reports.

Richter, of Frenchtown Township, is jailed on a $100,000 bond. She has requested a court-appointed attorney.

Authorities have not discussed a possible motive.