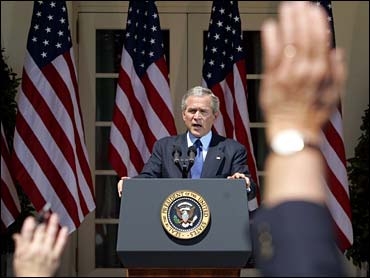 And while the relationship between the White House and the news media has been contentious at times, nearly half say the news media have treated George W. Bush the same as they have other presidents.

How much confidence do you have in the news media?

Not very much / None

The stories in the news media are:

Americans younger than age 45 are more likely than those older than 45 to say stories by the media are accurate. And more Democrats and Independents than Republicans say the news media's stories are accurate.

The Media And The President

Compared to other presidents, the news media have been:

Republicans are more than five times as likely as Democrats to say the news media have been harder on George W. Bush compared to other presidents.

How often do the News Media tell the truth?

Always / Most of the time

How often does the Bush Administration tell the truth?

Always / Most of the time

As expected, views on whether the Bush Administration tells the truth break down along party and ideological lines. Majorities of Republicans and conservatives say the administration is truthful all or most of the time, while most Democrats and liberals hold the opposing view. Also, the president is not extremely popular right now; his approval rating is at a low 42 percent.

This poll was conducted among a nationwide random sample of 1229 adults, interviewed by telephone January 20-25, 2006. The error due to sampling for results based on the entire sample could be plus or minus three percentage points.
For detailed information on how CBS News conducts public opinion surveys, click here.