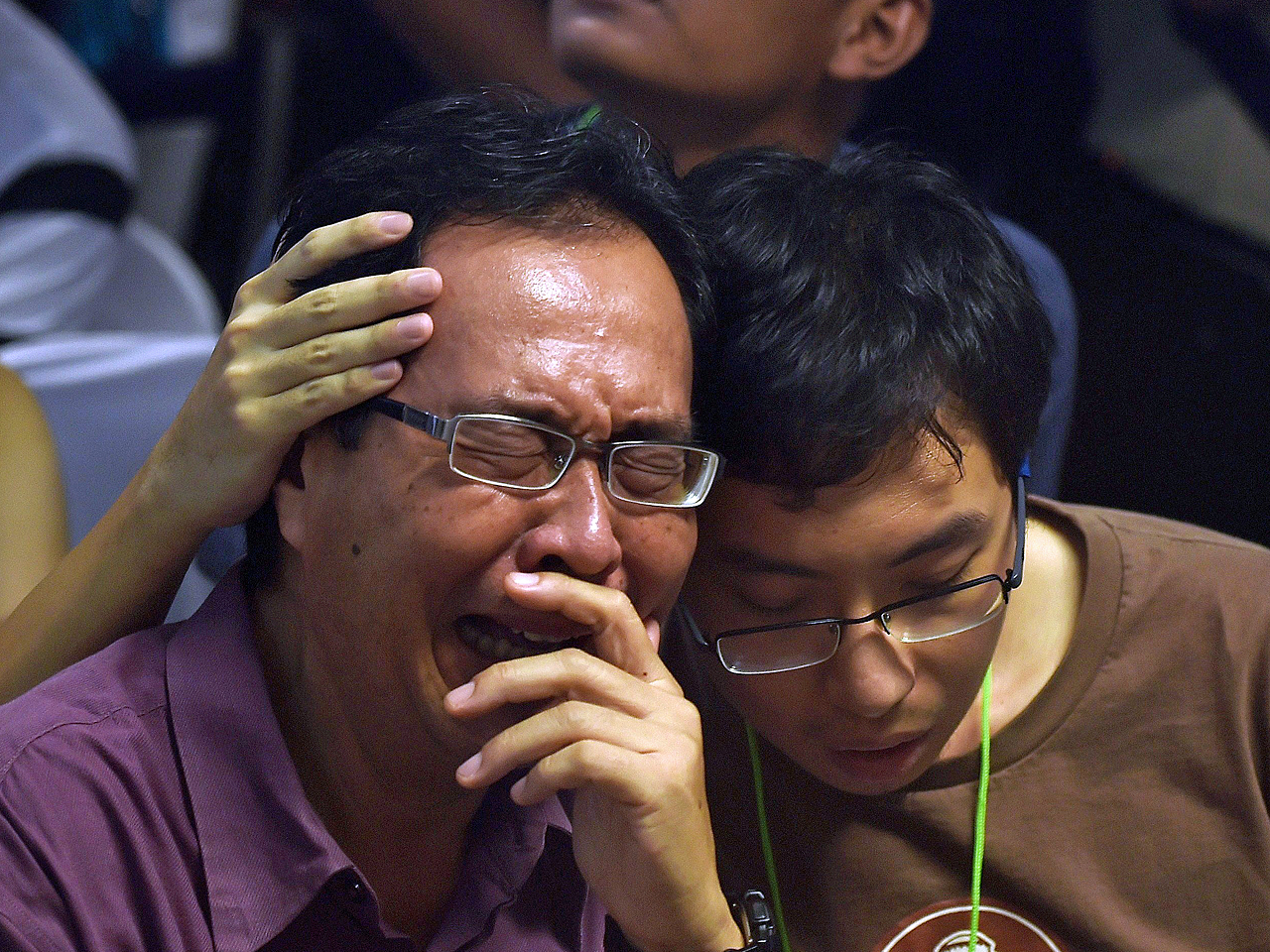 SURABAYA, Indonesia -- Family members of those aboard AirAsia Flight 8501 collapsed in agony Tuesday as images of debris and a bloated body flashed across Indonesian television screens, proof that the plane crashed into the sea two days earlier with 162 people on board.

Indonesian officials on Tuesday spotted six bodies from the AirAsia flight that disappeared, and recovered three of them, in a painful end to the aviation mystery off the coast of Borneo island.

The bodies were found in Java Sea waters about 6 miles from Flight 8501's last communications with air-traffic control. The plane with 162 people on board disappeared Sunday on its way from Surabaya, Indonesia to Singapore after encountering storm clouds.

The three recovered bodies, swollen but intact, were brought to an Indonesian navy ship, National Search and Rescue Director SB Supriyadi told reporters in the nearest town, Pangkalan Bun. The corpses did not have life jackets on.

CBS News' Allen Pizzey reports that the first six bodies were recovered relatively quickly, and then searchers began reporting more and more bodies floating in the sea 100 miles from land and a mere 6 miles from where the airliner was last in contact with air traffic control.

French news agency AFP reported that as many as 40 bodies had been recovered, but that information was not immediately confirmed.

Images on Indonesian television showed a half-naked bloated body bobbing in the sea. Search and rescue teams were lowered on ropes from a hovering helicopter to retrieve corpses.

Search crews had also reportedly spotted a large shadow on the seafloor, believed to be the jetliner itself.

When the first picture of a body floating in the sea aired on local television, it was not blurred. When it appeared on a screen in the waiting room in Surabaya airport, where victims' relatives were waiting for news, some went into hysterics. For some, Pizzey says, the realization that the rescue and recovery operation was becoming just a recovery operation, was simply too much to bear.

Many broke down in tears, inconsolable that their last hopes had been dashed. Some had to be taken out of the waiting area on stretchers.

In a measure of just how raw emotions were in Surabaya, and how deeply the country has been hurt by the tragedy, local reports expressed horror that the TV had been left on for the families to watch.

AirAsia group CEO Tony Fernandes tweeted, "My heart is filled with sadness for all the families involved in QZ 8501. On behalf of AirAsia my condolences to all. Words cannot express how sorry I am."

Speaking to reporters later Tuesday, Fernandes said he was "confident... that they know more or less the position of the aircraft so we should be able to locate it."

"I think it's very clear that it's a crash," said Fernandes, "It's not missing anymore."

The discovery came after several pieces of red, white and black debris were spotted in the Java Sea near Borneo island. Officials later confirmed that the debris was from Flight 8501.

Pizzey reported that, if there was anything positive to glean from the day's news, it was that the location where the debris and bodies were found is in relatively shallow water -- thought to be less than 200 feet -- so recovery efforts should be straight forward.

The Reuters news agency reported Indonesia's Kompass TV showed pictures Tuesday of what looked like large, angular objects floating in the sea. The largest appeared to be several yards long.

The plane, with 162 people on board, disappeared Sunday on its way from Surabaya, Indonesia to Singapore after encountering storm clouds. A massive international search effort has been launched since Flight 8501 disappeared from radar over the Java Sea near Belitung island.

The United States announced it was sending the USS Sampson destroyer, joining at least 30 ships, 15 aircraft and seven helicopters in the search for the jet, said Indonesia's Search and Rescue Agency chief, Henry Bambang Soelistyo.

A Chinese frigate was also on the way, while Singapore said it was sending two underwater beacon detectors to try to detect pings from the plane's all-important cockpit voice and flight data recorders. Malaysia, Australia and Thailand also are involved in the search, and area fishermen are also helping.

The plane vanished Sunday halfway into what should have been a two-hour hop from Surabaya, Indonesia, to Singapore. The Airbus A320-200 is believed to have crashed into Indonesia's Java Sea, a busy shipping lane where water on average is only 150 feet deep.

On Monday, searchers made various sightings they thought might be related to the plane, but by Tuesday all those initial sightings had been dismissed.

Soelistyo said an Indonesian navy ship reached the spot where a military craft reported two oil patches in the Java Sea east of Belitung island. It was not jet fuel, or even oil, but coral.

"They were just shadows of two wide shapes of coral clusters that when seen from the air looked like oil spills," he said.

The search had expanded to include not only the sea but nearby land. As the sun rose Tuesday over Pangkalan Bun on the western part of Kalimantan, two Indonesian helicopters flew over the island looking for any sign of wreckage. Two other copters were hundreds of miles east, over the smaller islands of Bangka and Belitung.

The AirAsia pilots had been worried about the weather on Sunday and had sought permission to climb above threatening clouds, but were denied due to heavy air traffic. Minutes later, the jet was gone from the radar without issuing a distress signal.

Pilots rely on sophisticated weather-radar systems that include a dashboard display of storms and clouds, as well as reports from other crews, to steer around dangerous weather, and it's unlikely that alone would cause the plane to crash.

"A lot more information is available to pilots in the cockpit about weather" than ever, said Deborah Hersman, former chairman of the U.S. National Transportation Safety Board. But the technology has limits and sometimes information about storms "can be a little bit stale."

Ruth Natalia Puspitasari, who would have turned 26 on Monday, was among them. Her father, Suyanto, sat with his wife, who was puffy-eyed and coughing, near the family crisis center at Surabaya's airport.

"I don't want to experience the same thing with what happened with Malaysia Airlines," he said as his wife wept. "It could be a long suffering."

Few believe this search will be as perplexing as the ongoing one for Flight 370, which remains a mystery. Authorities suspect the plane was deliberately diverted by someone on board and ultimately lost in a remote area of the Indian Ocean that's thousands of feet deep. Flight 8501 vanished over a heavily traveled sea that is relatively shallow, with no sign of foul play.

The captain, Iryanto, who like many Indonesians uses a single name, had more than 20,000 flying hours, AirAsia said.

People who knew Iryanto recalled that he was an experienced military pilot, flying F-16 fighters before shifting to commercial aviation. His French co-pilot, Remi Plesel, had been in Indonesia three years and loved to fly, his sister, Renee, told France's RTL radio.

"He told me that things were going well, that he'd had a good Christmas. He was happy. The rains were starting," she said. "The weather was bad."