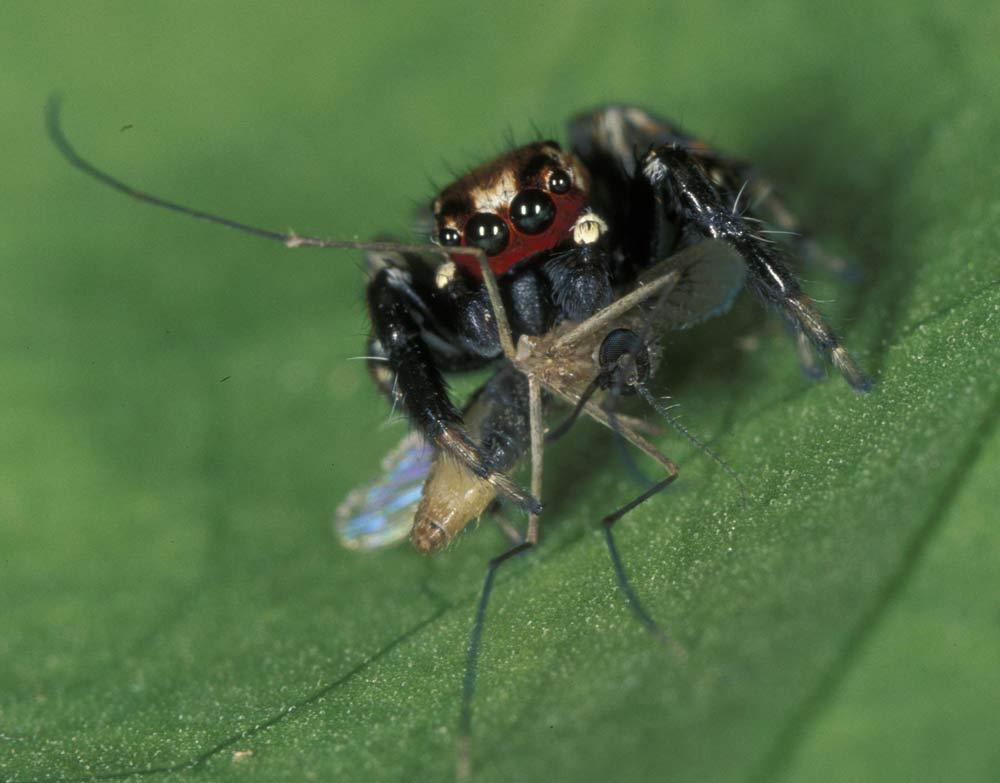 Two tiny "mosquito assassins" could one day help in an effort to control malaria.

In a study in the Journal of Arachnology in America, researchers from a university in New Zealand have identified two spider species that love munching on mosquitoes - but in very different ways.

One species, Evarcha culicivora, is particularly drawn to female mosquitoes whose guts are filled with blood. Another species, Paracyrba wanlessi, preferentially feeds on mosquito larvae lurking in pools of water inside bamboo.

"These two spider species are highly specialized mosquito assassins," said University of Canterbury's Fiona Cross, who along with her colleague Robert Jackson reviewed over 15 years' worth of research at the university and the International Centre of Insect Physiology and Ecology in Kenya.

"Like 'Bram Stoker's Dracula' or Arnold Schwarzenegger in the James Cameron movie 'The Terminator,' these little specialist predators ignore any other insects that get in the way as they pursue their target victims - mosquitoes," she said.

Jackson said there are other species of spiders that eat mosquitoes but none that make them a bulk of their diet like these two arachnids.

"Evarcha culicivora has a particular hankering for Anopheles mosquitoes - the very mosquitoes notorious for being malaria vectors," Jackson.

"E. culicivora and Anopheles are both found in Kenya and are attracted to human odor, particularly the odor of dirty socks," Jackson said. "This little spider is a predator that likes us and eats our enemies. By eating blood-filled mosquitoes, this spider also acquires a blood perfume that is attractive to members of the opposite sex."

The two spider species come from very different habitats, with E. culicivora most often seen on walls of buildings occupied by people in East Africa and P. wanlessi most often found in the hollow stems of bamboo in Malaysia.

Scientists have struggled to contain the disease and have made several advances this year, including a vaccine against it and a new class of drug compounds that inhibits the malaria parasites' ability to maintain adequate levels of sodium within their cells, leading to excessive water intake.

Though the spiders target mosquitoes, the researchers were careful to say they are not proposing to releases millions of these "mosquito terminators" into Africa and Asia to help control or even eradicate malaria. And they also tried to dispel the notion that the spiders could actually spread malaria by biting humans.

"Bamboo as a habitat may make P. wanlessi a less obvious candidate for a role in pest control, but E. culicivora willingly goes into our houses and kills malaria vectors," the researchers wrote. "Encouraging people to welcome these guests into their homes sounds like a good idea. Yet it is hard to be optimistic about educating the lay public when there are even entomologists, people who work with maggots and cockroaches, who find spiders repulsive."