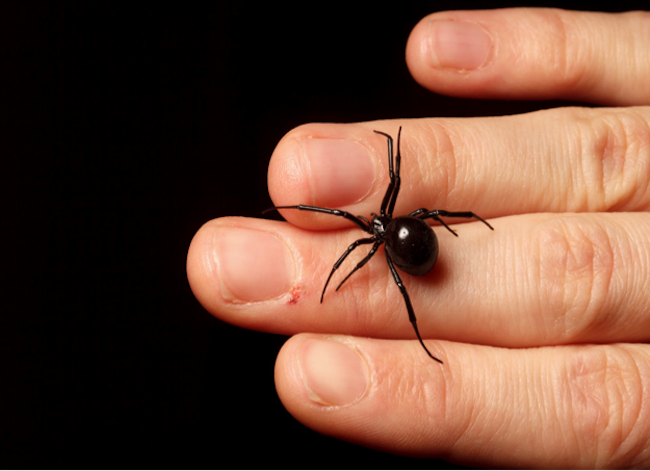 One woman's snack break turned sour last week when she reached into a bag of grapes and felt the bite of a venomous black widow spider. The 21-year-old Vermonter survived the ordeal, but some people who heard her story have since sworn off the fruit. But before you give up grapes forever, experts say there are a few things you should know about the (woefully misunderstood) black widow spider.

They don't want to go home with you

Believe it or not, black widow spiders don't want to live inside your bag of grapes. If you happen to find one of these critters in your grocery bag, you can bet the arachnid got there by accident, said Catherine Scott, an arachnologist at Simon Fraser University in British Columbia, Canada. [Creepy, Crawly & Incredible: Photos of Spiders]

The western black widow (Latrodectus Hesperus) is indigenous to grape-growing regions in California, as well as British Columbia and other western regions of North America. These spiders are a common sight in vineyards, where they typically build their large, tangled webs near grape plants, Scott told Live Science.

"The reason they're in the vineyards is to eat insects and other arthropods," Scott said. "It's not that they want to hang out on your grapes or in your home."

And yet, black widows do sometimes end up in people's kitchens. If a spider beats the odds and survives being plucked from its vineyard home, vigorously washed and then packed into a box, there's a chance it could travel all the way to your local grocery store and, eventually, into your home, said Todd Blackledge, a biology professor at the University of Akron in Ohio. Bananas are another fruit that often harbor stowaway spiders (though the so-called banana spiders that hitch a ride on fruit from Central America are almost always harmless), Blackledge told Live Science.

As with any kind of produce, you should wash grapes and even bananas in cold, running water before peeling and eating them, according to the U.S. Food and Drug Administration. Who knows, maybe this small step can also help you wash any lingering black widows right down the drain.

Despite their ferocious-sounding name, black widows are not aggressive creatures, said Scott, adding that a better word to describe these spiders is "shy."

"They have no reason to bite us unless they're threatened," Scott said. "We pose a much greater threat to them than they do to us."

The Vermont woman recently bitten by a black widow spider lurking among her grapes likely reached her hand directly into the bag and accidentally squished the spider hiding inside, Scott said. In other words, the spider likely wasn't just sitting on a grape, ready to pounce at any moment.

In fact, you really have to pinch a western black widow to get it to sink its teeth in, said Scott, who referenced a recent study that found that this species of spider is most likely to bite when it's pinched along the entire length of its body (something that might happen if it is attacked by a predator or sat upon by an unsuspecting human).

In most cases, poking the spider repeatedly with a finger wasn't enough to get the arachnid to bite, the researchers found. Instead, the prodded black widows in the study often ran away, played dead or flicked a few strands of silk at their attackers.

When they do bite, they don't usually kill

Black widows eat insects, as well as other arachnids, that they catch in their webs. The spiders' venomous bites can kill a mosquito, fly, caterpillar or even a grasshopper. However, their venom isn't meant to kill you. While these spiders' bites can cause fatalities in humans, they rarely do, according to the National Institutes of Health, which states that fatalities from black widow bites typically occur among young children, the elderly and those who are extremely ill.

"Yes, black widows are venomous, but they pose very little danger to humans," Scott said. "The majority of bites that do occur are not serious. People either recover with no intervention at all, or they go to the hospital and are treated and then are fine."

In 2013, there were 1,866 black widow bites reported to the American Association of Poison Control Centers, but as Scott pointed out, only 14 of these envenomations resulted in severe symptoms. None resulted in death.

In fact, not all bites from a black widow spider result in envenomation. These spiders can choose when to inject venom into their perceived attackers, and how much to inject. The same study that found black widows tend to reserve bites for extreme threats also found that black widows' bites are usually venomous only when the spiders feel their lives are in imminent danger. If the threat is less severe, the black widow may deliver what's known as a dry, or nonvenomous, bite, the researchers found.

"Venom is expensive to produce," Scott said. "So they'd rather save it for their next meal rather than wasting it on a human."

They're actually kind of awesome

Once you get over your fear of black widows, you can finally stop to appreciate how cool these arachnids really are. Scott said the thing that interests her most about this spider is its complex system of communication.

"Spiders communicate with each other using vibrations and chemicals called pheromones," Scott said. "They can transmit all kinds of complex messages. Black widow females put pheromones on their silk, which is attractive to males. It's [like] a scent-based personal ad -- he can tell if she's mated before, if she's hungry."

And despite what her name suggests, the female black widow doesn't always dispose of her mate after copulation, Scott explained. While some species of widow spider (particularly the Australian redback spider) always consume their sex partners, the western black widow that recently made headlines rarely engages in such cannibalistic activities, said Scott.

She added that the mating rituals of western black widows are actually kind of romantic.

"The male does this awesome courtship dance on the female's web to tell her he's a male and not a meal," Scott said.