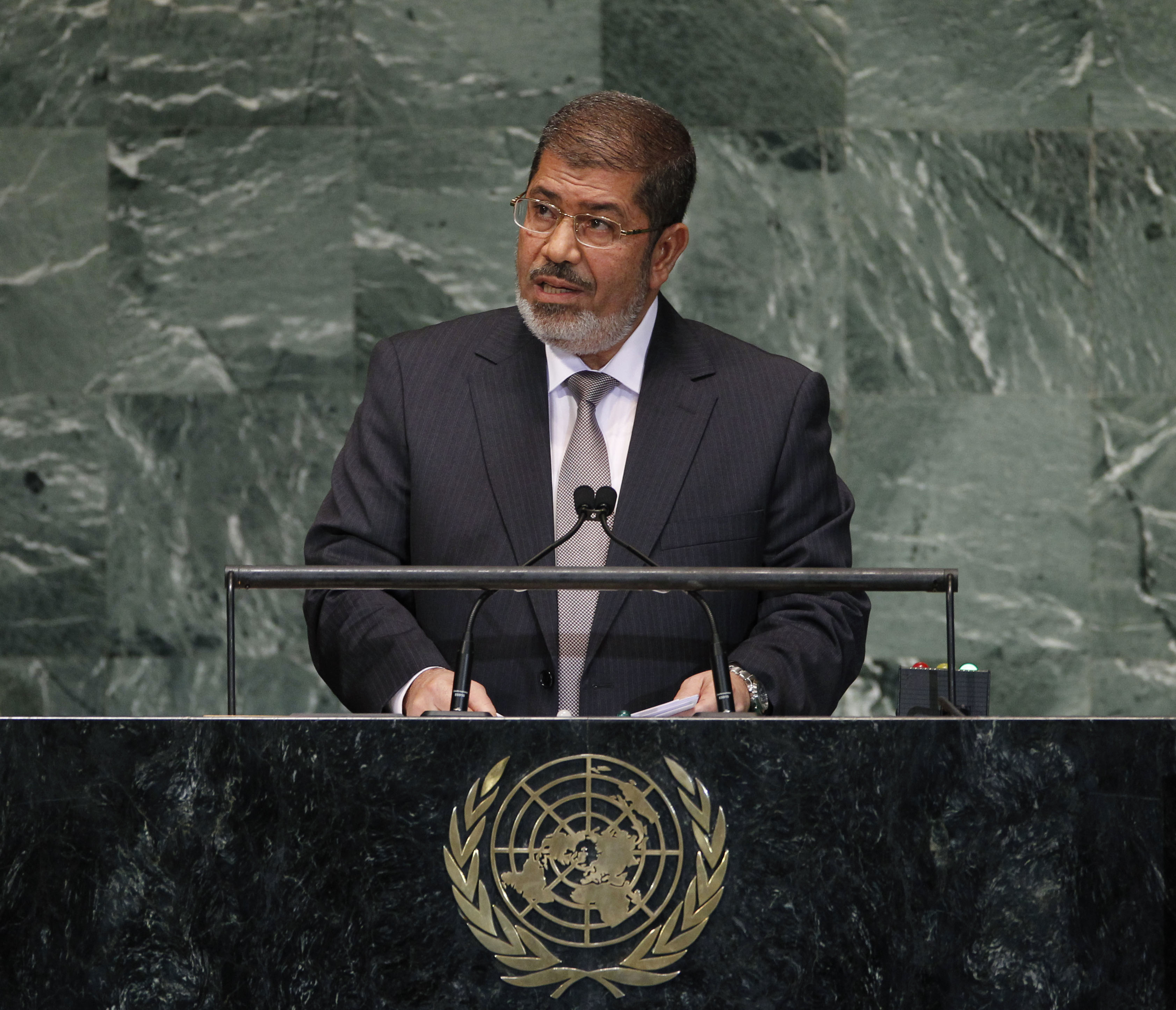 (CBS/AP) UNITED NATIONS - Egypt's new President Mohammed Morsi, making his debut on the global stage at the United Nations, said Wednesday that he will not rest until the civil war in Syria is brought to an end.

He called the fighting there, which opposition groups say has killed at least 30,000 people, the "tragedy of the age" and one that "we all must end." And he invited all nations to join an effort to stop the bloodshed that began about 18 months ago when opposition figures rose up against President Bashar Assad's regime.

President Morsi on the U.S. and Egypt: "We are not enemies"

Morsi, an Islamist and key figure in the once-banned Muslim Brotherhood, opened his remarks to the U.N. General Assembly by celebrating himself as Egypt's first democratically elected leader who was swept into office after what he called a "great, peaceful revolution."

Watch a "CBS This Morning" interview with Mohammed Morsi:

He said the first issue for the world body should be certifying the rights of the Palestinian people.

"The fruits of dignity and freedom must not remain far from the Palestinian people," he said, adding that it was "shameful" that U.N. resolutions are not enforced. He decried Israel's continued building of settlements on territory that the Palestinians claim for a future state in the West Bank.

On another subject, Morsi condemned as an obscenity the video produced in the United States that denigrated Islam's Prophet Muhammad. He insisted that freedom of expression does not allow for attacks on any religion.

Morsi also condemned the violence that swept Muslim countries last week in reaction to the video. At least 51 people were killed, including the U.S. ambassador to Libya and three other Americans targeted in an attack on the U.S. consulate in Benghazi.

He appeared to have been responding to President Barack Obama's General Assembly speech Tuesday in which the U.S. leader again condemned the video but sternly defended the U.S. Constitution's guarantees of free speech.

Morsi did not explain what limitations he felt should be placed on free speech but said the video and the violent reaction to it demanded "reflection." He said freedom of expression must be linked with responsibility, "especially when it comes with serious implications for international peace and stability."

In an interview with Charlie Rose of "CBS This Morning," Morsi was asked if there was a heated phone conversation between himself and President Obama. "It was warm," he said. "It was not hot." (laughs) It's the same difference between a friendship and being an enemy." As far as the relationship between Egypt and the U.S., Morsi said, "We are not enemies, of course. We are friends."

When Rose asked Morsi in the interview if the latter considers the U.S. an ally, Morsi responded, "That is dependent on the definition of an ally. The understanding of an ally as part of a military alliance, this is not existing right now. But if you mean by allied partnership, and special diplomatic relationship and cooperation, we are that ally."

Watch a "CBS This Morning" interview with Iranian President Mahmoud Ahmadinejad on the topic of Syria:

Earlier Wednesday, Iranian leader Mahmoud Ahmadinejad, known for past fiery denunciations of the United States and Israel, spoke at length about his vision for a new world order without the "hegemony of arrogance." And of Israel, he cited what he termed the "continued threat by the uncivilized Zionists to resort to military action against our great nation."

He did not refer to Iran's nuclear program. Israel and Western nations contend that Tehran is using what it insists is a peaceful nuclear program as a cover for developing the ability to build atomic weapons. Iran is suffering under tough sanctions as punishment for Iran's failure to cooperate with the U.N. nuclear watchdog agency to prove the peaceful nature of its drive to enrich uranium to levels that could be used to build a nuclear weapon.

Israel has threatened a military strike against Iranian nuclear installations, but Obama insists that time remains to solve the dispute through diplomacy. Obama has vowed, however, to stop Tehran from obtaining a nuclear arsenal.

The U.S. delegation boycotted Ahmadinejad's speech in response to the "paranoid theories and repulsive slurs against Israel" included in a separate address delivered by the Iranian president on Monday.

"It's particularly unfortunate that Mr. Ahmadinejad will have the platform of the U.N. General Assembly on Yom Kippur, which is why the United States has decided not to attend," Erin Pelton, spokeswoman for the U.S. Mission to the U.N. said in a statement.

Another Arab leader making his first appearance at the U.N. General Assembly's annual ministerial meeting after being swept into power by the Arab Spring revolutions was Yemen's President Abed Rabbo Mansour Hadi. He took office in February after more than a year of political turmoil and is now trying to steer his country's democratic transition.

Hadi called on the U.N. to grant membership to Palestine and support a transfer of power in Syria.

"The only option for our brothers in Syria is to agree on an initiative ... for peaceful change and transfer of power through ballot boxes," he said.

Also Wednesday, members of the U.N. Security Council are scheduled to discuss change in the Arab world. With no sign of an end to the Security Council's paralysis over intervening to end the raging Syrian civil war, Germany's U.N. Ambassador Peter Wittig said his country chose to focus the council's ministerial session on something new and positive in the Mideast -- "the emergence of the Arab League as a regional actor that has proved to be essential for conflict resolution."

The 21-member Arab League has shaken off decades of near total submission to the will of the region's leaders and is seeking to transform itself after the seismic changes brought about by the Arab revolutions. The league has supported the rebels who ousted Libyan leader Muammar Qaddafi and suspended Syria in response to Assad's brutal crackdown against his opponents.

"This organization is promoting the values that the United Nations is standing for -- human rights, rule of law, democracy, pluralism," the fight against corruption and promoting economic opportunity, Wittig said.

As rebels claimed credit Wednesday for a strike on Syria's army command headquarters in Damascus, Arab League Secretary-General Nabil Elaraby said that advances by the opposition could lead to a break in the impasse.

"Either there will be a political solution, and here the government is not going to budge, or there will be a change in the situation there," he said. "The more the opposition gains ground, the more this will be easier."

Tunisian President Moncef Marzouki, who was swept to power after protests in his country kicked off the Arab Spring, told reporters that the Arab League must act immediately to protect the lives of Syrians.

"The Syrian people haven't been backed as they deserve, and it's now our responsibility as Arabs to back these people against a bloody dictator who's obviously decided to burn the whole country to stay in power," he said.