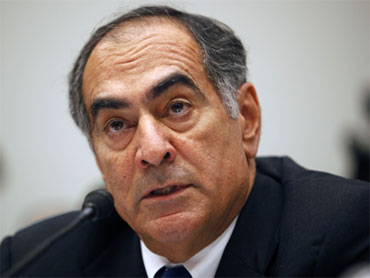 John Mack will step down as CEO of Morgan Stanley in January but remain as chairman, having navigated the bank through the stormiest period for the U.S. financial industry since the 1930s.

Mack, who is 64, will be succeeded by James Gorman, the head of Morgan Stanley's wealth management business, the bank said Thursday. Gorman, 51, was one of the first executives Mack hired when he returned to the firm in 2005 after being forced out in a power struggle four years earlier.

Robert Kidder, lead director of Morgan Stanley, said in a statement that Mack told the board 18 months ago he wanted to step back from the CEO role when he turns 65 in November.

Gorman has been co-president of Morgan Stanley for two years and was a key player in the firm's retail brokerage business. He previously worked for Merrill Lynch and the consulting group McKinsey & Co.

Morgan Stanley's other co-president, Walid A. Chammah, will become chairman of the company's overseas division at the end of the year, and will continue to be based in London.

While Mack has taken criticism in recent months for holding Morgan Stanley to a newly conservative approach to trading, the man known as "Mack the Knife" for his aggressive leadership style led the investment bank through the height of the financial crisis last year even as three of its peers — Bear Stearns, Lehman Brothers and Merrill Lynch — either collapsed or were acquired.

"They were able to stay independent, which was no small feat given what was going on in the industry," said Tom Kersting, financial services analyst with Edward Jones.

In the last months of 2008, Mack scrambled to keep Morgan Stanley on steady financial footing. He struck a deal with China's international investment fund to sell a portion of the company for $5 billion, and raised $9 billion in a deal with Japan's Mitsubishi UFJ Financial Group.

In the weeks following the collapse of Lehman and the hurried sale of Merrill Lynch to Bank of America Corp., Mack oversaw Morgan Stanley's transition from an investment bank into a bank holding company, making it eligible for government aid but also bringing tighter regulatory scrutiny. Goldman Sachs, the only other full-fledged investment bank to survive the financial crisis, also became a bank holding company.

The criticism from Wall Street referred to what Morgan Stanley had called a more balanced approach to trading, which failed to generate the kind of revenue its earlier risk taking had produced.

The results show in its stock price. Morgan Stanley shares closed Thursday at $28.64, down about 37 percent since Mack took over in June 2005. Goldman shares are up about 68 percent in that same time period, closing Thursday at $174.87.

Mack's return in 2005 was a redemption for him after being forced out of his prior position as president and chief operating officer in 2001. He had worked his way up the ranks at the storied investment bank since being hired as a bond salesman in 1972.

After leaving, Mack took over Credit Suisse First Boston as chief executive, and was promoted the following year to CEO of Credit Suisse Group. He left that post after two years, and was serving as chairman of the hedge fund Pequot Capital when he was brought back to succeed ousted Morgan Stanley CEO Phil Purcell.

At the time, Mack was seen as someone who understood Morgan Stanley's problems, and it was thought he would be able to bring the firm together better than anyone else.

But praise for his leadership is not universal. "I was never a John Mack fan," said outspoken banking analyst Richard Bove of Rochdale Securities.

"He didn't seem to ever have a clear strategic vision as to where he wanted to bring this company," Bove said. "As a result every time a new fad arose in the financial sector, he jumped on it."

Gorman will be overseeing a very different industry from the one Mack navigated. Morgan Stanley's classification as a bank holding company means it can't use as much borrowed money as it used to, which was once an easy way to juice profits. Also some markets the company made money in, including some of the more exotic forms of mortgage-backed securities, no longer exist.

"He knows how to develop a long term strategy," Bove said. "I think what Morgan Stanley needed now more than anything is strategic direction."

Large swaths of the U.S. are at risk of blackouts this summer
Thanks for reading CBS NEWS.
Create your free account or log in
for more features.
View CBS News In
CBS News App Open
Chrome Safari Continue
Be the first to know
Get browser notifications for breaking news, live events, and exclusive reporting.