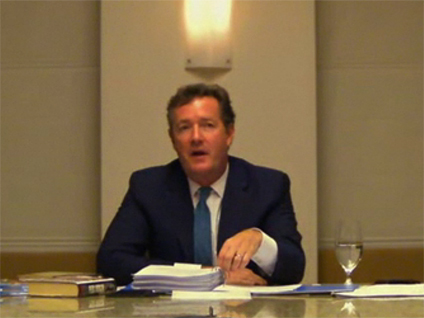 LONDON - A tense and sometimes confrontational Piers Morgan stood his ground before a judge-led inquiry into media ethics Tuesday, denying any connection to illegal phone hacking which has resulted in the closure of the newspaper he once edited and the arrest of friends and former colleagues.

But the celebrity interviewer refused to answer questions about the most damning link between himself and scandal -- his 2006 acknowledgment that he had once listened to a poignant phone message left by former Beatle Paul McCartney for his ex-wife Heather Mills.

Mills has charged that there was no honest way Morgan could have heard the deeply personal message -- an explosive allegation that could prove embarrassing to CNN, which brought the 46-year-old journalist on board in January to replace presenter Larry King.

Morgan stubbornly refused to go into any detail about the message.

"I'm not going to discuss where I heard it or who played it to me," he told the inquiry via videolink from the United States.

Pressed by inquiry chief Lord Justice Brian Leveson as to whether he could say anything to substantiate that he had obtained the message legally, Morgan said he could not.

"I can't start any trail that leads to the identification of a source," he said.

The stakes are high for Morgan, who edited the News of the World Sunday tabloid between 1994 and 1995 before moving on to the Daily Mirror, where he stayed until 2004.

More than a dozen journalists have been arrested as part of still-expanding investigation into the News of the World -- including Morgan's friend Rebekah Brooks, who eventually succeeded him as editor there. Several other executives with Rupert Murdoch's News Corp. media empire have stepped down in disgrace, and top U.K. police officers have resigned over their failure to get to grips with the tabloid's illegal behavior.

Morgan's defense Tuesday was part denial, part apology, and a healthy helping of "I don't recall."

Morgan said he didn't think he'd ever heard an intercepted voicemail, and rejected the suggestion that he had any direct contact with the private detectives accused of carrying out many of the tabloids' dirtiest deeds, saying his subordinates would have been the ones charged with giving them assignments.

Morgan also dismissed his own interviews about phone hacking in which he'd said that "loads of newspaper journalists were doing it" or that he had trouble condemning the shady practices of private eyes "because obviously you were running the results of their work."

Morgan told the inquiry that those statements were based on nothing more than hearsay and the newspaper industry's "rumor mill."

He said he couldn't say who had filled him in on the rumors.

"My memory's not great about this. It was a long time ago," he said.

Although Morgan showed occasional flashes of humor, the atmosphere was mostly tense. Occasionally -- when confronted by written excerpts from his autobiographical book, "The Insider" -- Morgan accepted that some of what he had done had crossed the line.

For example, Morgan acknowledged that he had made use of Benji "the Binman" Pelham, a quirky freelancer who specialized in raking though celebrities' trash to look for scoops.

Morgan was also quizzed about the cozy relationship between Rupert Murdoch and former Prime Minister Tony Blair -- a line of questioning which drew a heavy hint that the News Corp. executive chairman may himself testify before the inquiry.

At one point inquiry lawyer Robert Jay told Morgan to stop speculating about what Murdoch might have remembered about a particular incident in which the two of them clashed.

"We can ask him for his recollection of events when we get there," Jay said.

A spokesman for the inquiry declined to elaborate, and News Corp. did not immediately return an email seeking confirmation. In July Murdoch gave dramatic testimony before Parliament in which he denied any responsibility for phone hacking at his flagship Sunday tabloid, which he shut in the wake of the scandal.

The inquiry, led by Leveson, heard Tuesday about the culture in tabloid newsrooms -- one described by some witnesses as being scarred by bullying.

Steve Turner, general secretary of the British Association of Journalists, said he had dealt with more than a dozen cases of bullying in the newsroom in recent years. He blamed diminishing circulation and "the demand to produce better stories and more of them from a diminishing work force" for some of the pressure, but said the culture at Murdoch's News of the World was particularly challenging.

That, he said, may have "pressured people more than most into behaving appallingly."

Marshall took pains to distance herself from her own book, saying she never intended to accuse anyone of wrongdoing and that the last half of the title -- "True Story" -- might have been misleading.

"I intended this as a comical tale," she said.

One by one, she dismissed her nearly all her own stories -- which her book insists are accurate -- as "dramatization," "topspin," "a good yarn," "a joke," or an "embellished shaggy dog tale."

True or not, Morgan seems to have approved; In a blurb splashed across the cover, he called the book "hilarious and gossipy."

Separately, Rupert Murdoch's News International announced settlements with seven more prominent figures in the wake of the phone hacking scandal at the now-shuttered News of the World.

The terms of the new payments announced Tuesday were not disclosed but they are likely to be substantial. Sienna Miller received 100,000 pounds (nearly $157,000) in damages when she settled with News International; the family of murdered British schoolgirl Milly Dowler were awarded 2 million pounds ($3.1 million) plus 1 million pounds ($1.6 million) from Murdoch himself, which was earmarked for charity.

Police say the number of potential phone hacking victims could be in the thousands.

CNN broadcast Morgan's appearance live -- but only on its international station.