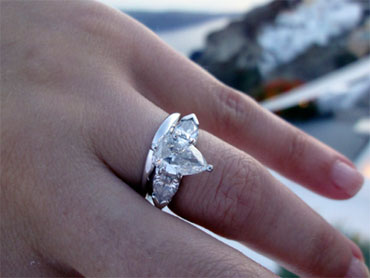 When Elizabeth Robichaux Brown got married nine years ago, she made a vow to love her husband, for better or for worse, until their dying days.

She did not make that same kind of commitment to her ring.

So, a few months ago, she did what more and more women are doing: She gave her original engagement ring an upgrade, placing two stones which she calls "the twins" on each side of her solitaire diamond.

"When I first got my ring, it was like, 'OK, I like this ring.' But I knew that eventually I would make it a different type of ring," she said. "I got a carat-and-a-half pear when I got married, but I always knew I wanted two pears on the side."

How to Pick the Perfect Diamond
Diamond Sold for Record Breaking $35.3M

While Brown added on, some women are trading in their original engagement rings and wedding bands for something else. No longer seen as a symbol to be worn for an eternity, rings are being upgraded like some people trade in cars or remodel an aging kitchen.

But sometimes it is about bigger, better and more fashionable. While gold bands were standards for decades, today many women wear white gold, platinum or other metals; and cuts and settings change too.

"I think it's natural to want something different," said Megan Flynn of M. Flynn Accessories, which custom designs engagement and wedding rings. "Rings do go out of style. A lot of women want that vintage look, with the diamond in the center and the small diamonds around it."

Some stores even promote the idea of an upgrade when a ring is purchased, offering trade-in value for the original ring for something more spectacular.

There is also the idea of the "pushing present" getting a new diamond for giving birth to a child.

Annie Loughead, married for three years, got her ring upgrade in the past few weeks, right after the birth of her daughter. Loughead said she had designs on a new design for her ring, however, almost as soon as it landed on her finger.

Like Brown, she got a solitaire diamond; hers was a classic, Tiffany-cut, 2.1-carat ring. As a wedding band, she actually got two rings with small diamonds all around them, to sandwich her solitaire.

"I really loved it, but what happened was that now that I have a baby ... it's a pain to have three different rings," Loughead said. "And I kind of did always want my engagement ring to have diamonds all the way around, but my husband, at the time he couldn't afford it."

Now, Loughead has just one diamond ring, but it's 3 carats -- her original diamond with smaller diamonds all around the band.

She initially was hesitant to broach the subject with her husband: "I was afraid it was going to hurt his feelings, and he was like, 'No, get whatever makes you happy.'"

Brodie said that sometimes it's the man who actually makes the first move.

"When people are trading up, I've often seen the man coming in," she said. "Then they bring the woman back with them to narrow down the decision-making, and then the man comes back and makes the purchase."

Newlywed Mike DiScala upgraded his wife's ring even before the marriage.

"The first ring I got her was quarter-carat, because the funds were not there, and then I splurged on her and I got her a 1.5 carat," he said.

He's already planning on another upgrade at the five-year mark, to 2 carats.

"She's my heart, and my soul mate," he explained.

Not all men are easygoing about having the band they purchased exchanged for another. When the conversation came up at a recent couples dinner, the husbands scoffed at the idea of "trading up" on their purchase -- "What if he wants to upgrade HER?" one joked.

Flynn says sometimes women make up excuses for wanting another ring -- "it hurts my finger" is a good one.

"They don't want to insult their husbands and whoever picked it out," she said.

One reason why Brown didn't get a new ring was that she didn't want to get rid of the diamond her husband originally gave her. "It was just so sentimental to me, so I decided that I was going to add on and make it the ring that I want it to be," she said.

In the years to come, she said, she might think of trading it in but also sees herself getting a new ring for her right hand.

Loughead thinks she's done with the upgrades, but adds with a laugh, "It's kind of like plastic surgery I would never say never. But I would hope, hope that I could keep it, because I really love it now."