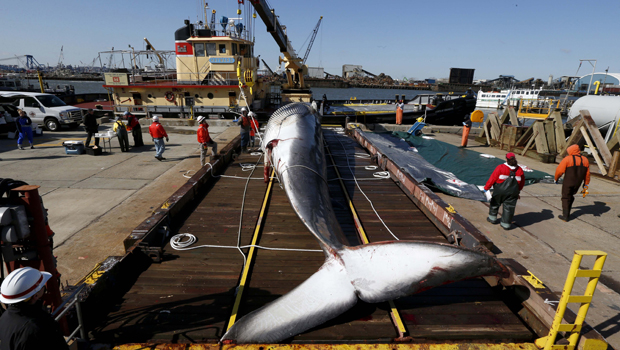 A cruise ship heading for New York this month struck and killed a whale and dragged it into the Hudson River, part of a higher-than-usual rate of strikes along the Eastern Seaboard for this time of year, a federal agency said.

There were three recent whale strikes recently, including one in which a cruise ship hit a sei whale and did not discover it until it reached port, the National Oceanic and Atmospheric Administration said.

In a similar case, a sei whale was found dead and attached to a container ship that was docking near Philadelphia, NOAA said.

The whales may be following food sources closer to shore, NOAA said. An increased food supply has recently been cited for a large increase in the number of humpback whales off Massachusetts.

The agency issued a reminder to mariners of measures already in place to protect whales, including speed limits and distances.

"Nobody wants to hit a whale," said Marjorie Mooney-Seus, a spokeswoman. "So we want people to have a greater awareness that they're out there now."

The usual rate of whale strikes by ships is about one every few weeks, she said, compared with the three in the past few weeks.

Rob DiGiovanni, who heads a marine mammal rescue group on Long Island, said he's seeing "more evidence of ship strikes and that's definitely a concern." In the past, his Riverhead Foundation for Marine Research and Preservation would go a couple of years without seeing a large whale that had been hit by a ship.

The New York cruise ship incident was discovered May 4, the Philadelphia case on May 7, Mooney-Seus said. She did not have details about the third recent strike except that it involved a fin whale; NOAA is investigating.

NOAA said there have been no recent reported strikes of endangered North Atlantic right whales.

DiGiovanni said his group hopes to study whether the numbers are up because there are more whales, more ships or a change in a food source, as suggested by NOAA.

In the coastal waters off Boston, large numbers of a fish called the sea lance have turned the mouth of Massachusetts Bay into a "whale feeding ground," said Laura Howes of Boston Harbor Cruises.

Twenty to 30 whales are being spotted on every whale watching excursion, 10 times the usual number.

Amazon to hire 150,000 workers for the holidays