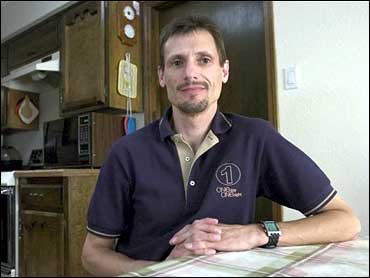 In an era of diet fixation, chiseled underwear models and "a culture of muscularity," some researchers say eating problems among men are getting worse - even as sufferers face a lingering stigma about having a "women's disorder."

"We're able to hide it much better," said Everts, a 43-year-old Albuquerque, N.M., resident recovering from anorexia and bulimia. "We don't talk about it, where women would."

Women are more likely to have eating disorders than men. But men can also suffer from bulimia, binge eating and, to a lesser extent, anorexia, according to researchers.

Leigh Cohn, co-author of "Making Weight," believes such disorders afflict about 2 percent of men versus 4 percent to 5 percent of women, and he is convinced the rate for men is on the rise. Other researchers have differing estimates, but there are no definitive studies.

"It's hard to know because men have been so reluctant to seek treatment," Cohn said. "And men, in many cases, are unaware that they have an eating disorder. For example, they may exercise obsessively and just think that's regular guy exercise behavior."

Athletes whose weight is crucial to their performance - jockeys, wrestlers, distance runners and gymnasts - have a higher incidence of eating disorders. Cohn said they can develop bad habits when weight loss is seen as a requirement of the sport.

The root causes can be similar for men and women: genetics, low self-esteem, trauma and cultural influences.

Just as women feel pressured to look like stick-thin magazine models, men can be swayed by images of pumped-up hunks with broad shoulders, six-pack abs and narrow waists. Pictures of perfect bodies can reinforce the belief that "normal" bodies are not OK, researchers say.

And those perfect male images - think muscle-bound movie heroes, magazine cover boys and shirtless rappers - can be hard to ignore.

"I don't know what's on 'NYPD Blue' tonight," Cohn said, "but I'm assuming that we'll see some male skin, because we almost always do."

Researchers at the University of Central Florida released a study this month saying men who watched TV commercials of muscular actors felt unhappy about their own physiques. This "culture of muscularity" can be linked to eating disorders or steroid abuse, the researchers said.

The book "The Adonis Complex" tracks the evolution of boys' action figures from the average GI Joe in the '60s to the absurdly pumped-up toys of today. Scaled to human size, the authors say one Wolverine action figure would have 32-inch biceps.

"Basically they're marketing to men in the same way they marketed to women," said Roberto Olivardia, co-author of the book. "And I think men and young boys have responded to that."

Dr. Theodore Weltzin of Rogers Memorial Hospital in Oconomowoc, Wis., said one study showed 70 percent of high school males dieting. The hospital offers residential treatment for males, and Weltzin says he sees a fair number of dieting men who are "carbohydrate-phobic," as opposed to women sufferers who tend to be fat-phobic.

"More males are engaged in really abnormal eating behavior in terms of skipping meals, in terms of engaging in purging after eating, and laxative use," Weltzin said.

Everts said his disorder became evident in high school in the late '70s when he began eating less and exercising more to become a better athlete. The 5-foot-10 football player got all the way down to 96 pounds, a hospital room and eventually, a psychiatric ward.

"They just basically said, 'If you eat, you'll get out,"' he said. That triggered a new problem: binge eating. Everts eventually found help, though he still considers himself recovering. He now weighs around 134 pounds - within the normal weight range for a man his height.

Researchers say people are becoming more aware of male eating disorders and more men are starting to come forward. But not all.

"My male patients also have to struggle with this layer of, `Well, does this make me less of a man? Am I gay? What is all of this about?"' Olivardia said.

While there is a stereotype that eating disorders are more prevalent among gay men, Olivardia believes that perception is because gay men are more likely to seek treatment.

He said he has patients in their 40s, meaning they have struggled with eating disorders for up to three decades before getting help.

Weltzin expects to see more male eating disorder cases in the future: "I don't see where percentages are going to go anywhere but up."