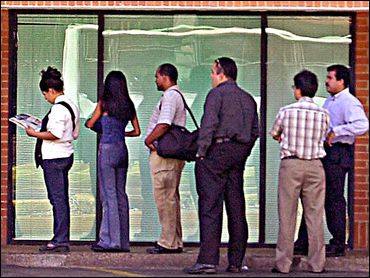 Payrolls in April and May also were revised down slightly from the big gains previously reported by the Bureau of Labor Statistics.

Friday's report presented a mixed picture of the health of the labor market as the midsummer presidential nominating conventions draw near and debate intensifies between President Bush and challenger John Kerry over the administration's economic record.

June's payroll increase was the 10th straight month of gains. But analysts had forecast a rise of at least 250,000 in payroll employment as another sign of renewed strength in the labor market.

"I'm not ready to panic," said Joel Naroff, president of Naroff Economic Advisors in Holland, Pa. "But clearly the job market is not as strong as we initially thought."

In a separate report, the Commerce Department said factories experienced decreases in orders in May for the second straight month as demand for cars and other big-ticket goods declined.

The 0.3 percent drop in orders placed with U.S. factories came after a larger 1.1 percent decline in April, the department said.

The overall civilian unemployment rate has stayed at 5.6 percent all year, except for March, when it rose to 5.7 percent. Economists expect the rate to slowly decline throughout the year. But job growth first must absorb all the people returning to the pool of available workers. Last month, the labor force grew by 305,000.

Mr. Bush has been counting on continued employment growth to boost his re-election effort. But one obstacle he faces is convincing Americans that their job prospects are truly brightening.

"With more than a million new jobs in the last four months, these numbers show that the trend is our friend," said Commerce Secretary Donald Evans. "The president's economic plan is working. More Americans are working."

Evidence of a strengthening labor market and the specter of new inflationary pressures prompted the Federal Reserve on Wednesday to raise interest rates for the first time in four years. The quarter-point increase was the first change since the funds rate was cut to a 46-year low of 1 percent in June 2003.

That had marked the 13th Fed rate cut in a series that began back in January 2001 as the central bank battled to jump-start an economy staggered by a series of blows, from a plunging stock market and the 2001 recession to terrorist attacks and two wars.

"I think from all other reports, businesses are hiring again," Naroff said. "I think people got too hopeful" with reports showing strong job growth the three previous months.

The nation's factories took a hit last month, with employment falling by 11,000 after an increase of 75,000 in the previous four months. That improvement had ended a nearly three-year jobs drought, and economists had hoped to see continued hiring.

Hiring was flat at construction companies, and fell in government.

The health care and social services industries continued to add jobs, growing by an overall 30,000 in June. Employment in professional and technical services rose by 23,000 — led by continued gains in temporary employment firms.

Temp firms have added 306,000 new jobs since April 2003, providing some ammunition to critics of the Bush administration's economic policies. Democrats and others have contended that the recent surge in hiring is occurring in industries that pay far less than the 1.2 million jobs that were lost since Bush took office.

Transportation and warehousing companies added 19,000 last month. In retail, clothing stores continued to hire, but home improvement and garden supply stores did not. Neither did car dealers and auto parts stores.

The unemployment rate for specific groups changed little, but wide differences remained. While 5 percent of whites and 5 percent of Asians were unemployed, 10 percent of blacks, 6.7 percent of Hispanics were jobless and more than 16 percent of teenagers were.

In a report on Thursday of more volatile weekly jobless claims, the number of people signing up for unemployment benefit rose slightly last week. The Labor Department reported that new filings for unemployment insurance rose by a seasonally adjusted 1,000 to 351,000 for the week ending June 26. Economists were forecasting a decrease in claims to around 345,000