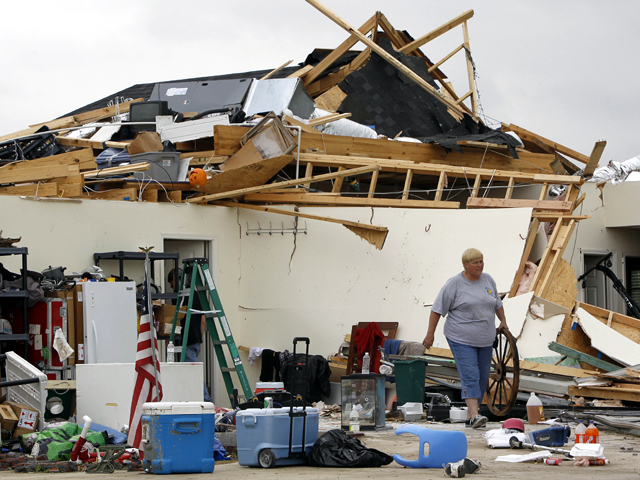 VILONIA, Ark. - A day after a series of powerful storms in Arkansas killed 10 people in flooding and a tornado that twisted a tractor-trailer like a wrung dish rag, residents in several states braced Tuesday for a second straight night of violent weather as forecasters again called for twisters to hammer the region.

The National Weather Service issued a high risk warning for severe weather in a stretch extending from northeast of Memphis to just northeast of Dallas and covering a large swath of Arkansas. It last issued such a warning on April 16, when dozens of tornadoes hit North Carolina and killed 21 people.

The forecast came as communities in much of the region struggled with flooding and the aftermath of tornadoes that destroyed homes and businesses. In Arkansas, a tornado smashed Vilonia, just north of Little Rock, on Monday night, ripping the roof off the grocery store, flattening homes and tossing vehicles into the air.

Four people died in less-than-sturdy structures in the Black Oak Subdivision of Vilonia. Two were a couple from Greenbrier, David and Katherine Talley, who sought shelter in a detached trailer from a big-rig truck. Faulkner County spokesman Stephan Hawks said the Talleys climbed into the trailer rather than endure the storm in their car. The trailer was blown into a pond, where their bodies were found.

Another victim was Charles Mitchell, 55, who died in his mobile home. A 63-year-old man who lived in another mobile home also died, and Hawks said his name would be released after relatives are notified.

Gov. Mike Beebe toured the rural community of 3,800 with emergency officials Tuesday morning and talked with storm survivors as they cleared debris from their homes.

"These folks have faced some terrible losses and I'm surprised there aren't more fatalities, based upon looking at some of the damage," Beebe said.

Beebe credited the survivals on an early tornado-warning system, "luck" and "just the good Lord watching over."

The tornado battered most of the homes in the Quail Hollow subdivision of Vilonia, leaving many without a roof. A wooden fence could be seen sticking out of the top one house.

Terina Atkins, a middle school librarian, said she and her family rode out the storm in their laundry room. Adkins said she heard a loud sucking noise and realized that air was being sucked out through the drain.

"We clogged up the sink and we could feel our ears popping," Atkins said.

Hawks said the infrastructure in and around Vilonia was badly damaged.

"One of the hardest hit things is the utilities. It tore down power lines for, gosh, I'd guess a mile or so. It snapped overhead poles like they were toothpicks. It's pretty devastating," he said. "It was a heck of a little tornado."

In northwest Arkansas, two men apparently drowned in Bentonville after the small pickup truck they were in was swamped by a swollen creek, likely the night before, Benton County Coroner Daniel Oxford said. He didn't name the men because their relatives hadn't yet been notified.

Three other people died in the flooding elsewhere in northwest Arkansas, authorities said.

Authorities found the body of 52-year-old Larry Mitchell on Tuesday afternoon east of Casa, he said. Mitchell was driving poultry feed to chicken houses when he came across a log in the middle of the road, Montgomery said. Mitchell radioed to his co-workers that he was going out to remove it, but they never heard back from him.

The deaths from Monday's storms bring this month's storm-related death toll in Arkansas to 17.

National Weather Service meteorologist Marty Trexler urged Arkansas residents to be as wary of flash flooding as they are of tornadoes.

"There are more deaths from flooding every year in the U.S. than from tornadoes," Trexler said.

In Garland County, about 60 miles southwest of Little Rock, rescuers struggled because of the tremendous number of downed trees and power lines.

"We still at this time have people trapped in homes that have not been reached because of downed power poles and storm damage," Garland County emergency management coordinator Joy Sanders said.

"It looks like we got run over three or four times," Sanders said.

Garland County sheriff's spokesman Judy Daniell said an 8-month-old baby was sent to Arkansas Children's Hospital in Little Rock with a head injury, but no other major injuries have been reported in the area.

The National Weather Service office in North Little Rock sent teams to Vilonia and Garland County to investigate the damage and assess how much was caused by tornadic or straight-line winds. John Robinson, a weather service warning coordination meteorologist, said it could take days to survey all the damage.