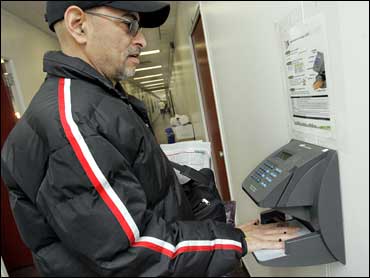 Some workers are doing it at Dunkin' Donuts, at Hilton hotels, even at Marine Corps bases.

Employees at a growing number of businesses are starting and ending their days by pressing a hand or finger to a scanner that logs the precise time of their arrival and departure - information that is automatically reflected in payroll records.

The new systems have raised complaints, however, from some workers who see the efforts to track their movements as excessive or creepy.

"They don't even have to hire someone to harass you anymore. The machine can do it for them," said Ed Ott, executive director of the New York City Central Labor Council of the AFL-CIO. "The palm print thing really grabs people as a step too far."

The International Biometric Group, a consulting firm, estimated that $635 million worth of these high-tech devices were sold last year, and projects that the industry will be worth more than $1 billion by 2011.

Ingersoll Rand Security Technologies, a leading manufacturer of hand scanners based in Campbell, California, said it has sold at least 150,000 of the devices to Dunkin' Donuts and McDonald's franchises, Hilton hotels and to Marine Corps bases, who use them to track civilian hours.

Protests over using palm scanners to log employee time have been especially loud in New York City, where officials are spending $410 million to install an automated attendance tracking system that may eventually be used by 160,000 city workers.

Scores of civil servants who are members of Local 375 of the Civil Service Technical Guild rallied Tuesday against a plan to add the city medical examiner's office to the list of 17 city agencies which already have the scanners in place.

The scanners have rankled draftsmen, planners and architects in the city's Parks Department, which began using them last year.

(AP Photo/Richard Drew)
"Psychologically, I think it has had a huge impact on the work force here because it is demeaning and because it's a system based on mistrust," said Ricardo Hinkle, a landscape architect who designs city parks.

He called the timekeeping system a bureaucratic intrusion on professionals who never used to think twice about putting in extra time on a project they cared about, and could rely on human managers to exercise a little flexibility on matters regarding work hours.

"The creative process isn't one that punches in and punches out," he said.

A spokesman for Mayor Michael Bloomberg, Matthew Kelly, said the system is not meant to be intrusive and has clear benefits over old-style punch clocks or paper time sheets.

The city expects to save $60 million per year by modernizing a complicated record keeping system that now requires one full-time timekeeper for every 100 to 250 employees. The new system, dubbed CityTime, would free up thousands of city employees to do less paper-pushing.

Another benefit of the system is curtailing fraud. Several times each year, New York City's Department of Investigation charges city employees with taking unauthorized time off and falsifying timecards to make it looked as though they worked.

Other cities have embraced similar technology.

Cities as big as Chicago and as small as Tahlequah, Oklahoma, have turned to fingerprint-driven ID systems to record employee work hours in recent few years. And the systems have been introduced into plenty of other workplaces without much grumbling by employees, especially those already used to punching a clock.

But the New York workers are not the first to fight it. The American Federation of State, County and Municipal Employees complained vigorously two years ago after the city of Pittsburgh proposed installing fingerprint readers.

"We had a lot of questions, a lot of concerns, and so far they haven't put it in," said AFCME Council 84 Director Richard Caponi.

Jon Mooney, Ingersoll Rand's general manger of biometrics, said the privacy concerns are unfounded. The hand scanners do not keep large databases of people's fingerprints - only a record of their hand shape, he said.

Still, union officials in New York said they are concerned that the machines could eventually be used not just to crack down on employees skipping work, but to nitpick honest workers or invade their privacy.

"The bottom line is that these palm scanners are designed to exercise more control over the workforce," said Claude Fort, president of Local 375. "They aren't there for security purposes. It has nothing to do with productivity... It is about control, and that is what makes us nervous."