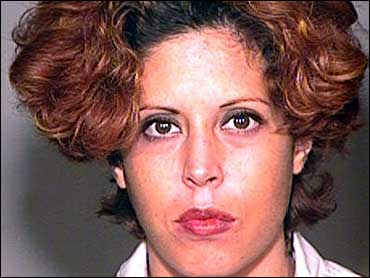 Gov. Jeb Bush's 25-year-old daughter was found with crack cocaine at a rehabilitation center, police said Tuesday. If confirmed, it would be her second lapse since entering court-ordered drug treatment.

Police were called to the Center for Drug Free Living in Orlando late Monday, where workers gave them a "white, rocklike substance" they said they found in Noelle Bush's shoes, Police Sgt. Orlando Rolon said.

The 0.2-gram rock tested positive for cocaine, but Bush wasn't immediately arrested because police couldn't obtain a sworn statement that she had been in possession of the drug, Rolon said.

Possession of any amount of cocaine is a felony.

Police spokeswoman Teresa Shipley said staffers at the center ripped up the responding officer's report late Tuesday and told him that the matter should be handled in-house. The officer retrieved his report from a trash can.

A spokeswoman for the center, Joan M. Ballard, refused to comment Tuesday morning.

A worker at the center who declined to be identified said the center was required by law to report discovery of the cocaine, but the institution's policy was to handle violations in-house whenever possible.

The governor, asked about his daughter before going into a Florida Cabinet meeting in Tallahassee, said he wouldn't discuss her situation.

"This is a private issue as it relates to my daughter and myself and my wife," he said. "The road to recovery is a rocky one for a lot of people that have this kind of problem. I don't have any details about what happened. I just found out."

In a statement issued by his office, Bush added, "My family loves Noelle very much and continues to pray for her continued progress. We again ask the public and media to respect our privacy during this difficult time for our family."

Bush was arrested in January at a Tallahassee pharmacy drive-through window for allegedly trying to buy the anti-anxiety drug Xanax with a fraudulent prescription.

She was admitted to the treatment center a month later, with the possibility charges would be dropped if she completed the program.

But in July, she was found to be in contempt of court because a worker at the treatment center found her carrying prescription pills, which belonged to another worker and had been taken from a cabinet. Circuit Judge Reginald Whitehead sent her to jail for three days.

Karen Levey, a spokeswoman for the court, said if Noelle Bush violates a drug court contract, Whitehead could sanction her with more jail time.

But State Attorney's Office spokesman Randy Means added that if Bush is charged with drug possession, she could be kicked out of her treatment program. She would then have to face punishment for the Tallahassee crime as well as any Orlando case.

Drug prescription fraud, as in the Tallahassee case, is a third-degree felony that carries a maximum penalty of five years in prison and a $5,000 fine if convicted. Rolon said she might not face charges if the judge overseeing her case decided to intervene.

Rolon said that Whitehead was likely to review the Noelle Bush matter sometime in the next few days, and if he decides to intervene, that would effectively end the criminal investigation.

"If he chooses to act, the police investigation would just create a double jeopardy situation," Rolon said.

Until the judge makes his decision, police will continue their investigation, Rolon said. Investigators plan to re-interview night-shift employees of the center who were on duty when the cocaine was discovered.

At a brief hearing last month, Whitehead encouraged Bush to "hang in there" after she expressed concerns about the treatment program, adding, "You're getting that much closer to completing the program." The nature of her concerns was not made public.