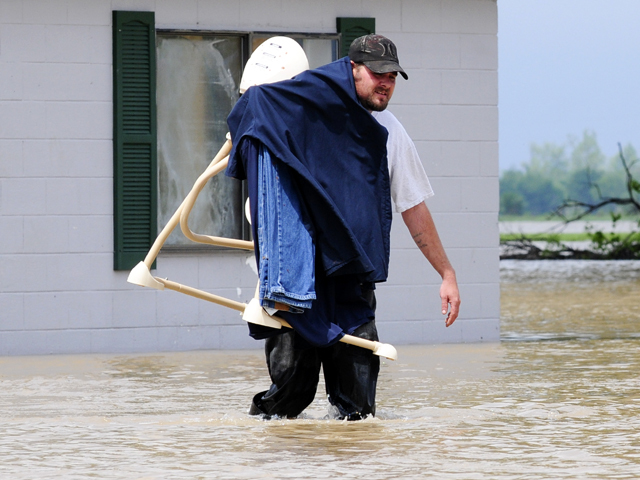 JEFF BUSBY PARK, Miss. - A wave of thunderstorms with winds blowing near hurricane force strafed the South on Wednesday, killing at least 16 people from Arkansas to Alabama, including a father struck by a tree while protecting his daughter at a Mississippi campsite.

The system laced with suspected tornadoes spread destruction Tuesday night and Wednesday from Texas to Georgia. An earlier flare-up of storms this week had already killed 10 people in Arkansas and one in Mississippi.

South on high alert as storms keep up assault

Forecasters warned that even worse weather could be on its way. The system was forecast to hit Georgia, Tennessee and Kentucky on Wednesday night and then the Carolinas.

"Today is the day you want to be careful," said Greg Carbin of the National Weather Service's Storm Prediction Center in Oklahoma.

CBS News correspondent Cynthia Bowers reports from Poplar Bluff, Mo., that tensions remained high Wednesday after the Black River crested a day earlier at 22 feet, just inches below its highest level ever, which came in 2008 when the area was hit by what officials called a 100-year flood.

Bowers reports that, with the forecast calling for more rain, many in the town about 130 miles south of St. Louis worry that the levee could go anytime, causing the town's second "100-year flood" in less than three years.

On Wednesday morning, a Louisiana police officer on a camping trip in Choctaw County, Miss., was killed when a towering sweetgum tree fell onto his tent as he shielded his young daughter with his body, said Kim Korthuis, a supervisor with the National Park Service. The girl wasn't hurt.

The 9-year-old girl was brought to a motorhome about 100 feet away where campsite volunteer Greg Maier was staying with his wife, Maier said. He went back to check on the father and found him dead.

Her father, Lt. Wade Sharp, had been with the Covington Police Department for 19 years.

"He was a hell of an investigator," said Capt. Jack West, his colleague in Louisiana.

Also in Mississippi, a man was crushed in his mobile home when a tree fell during the storm, a truck driver died after hitting a downed tree on a state highway and a member of a county road crew was killed when he was struck by a tree they were removing. The governor made an emergency declaration for much of the state.

Alabama was also in a state of emergency. CBS News confirmed with Alabama Emergency Management Agency that at least six fatalities have occurred in the state as a result of the storm. One woman died when her mobile home was torn to shreds, and a second woman was trapped under a mobile home elsewhere. Falling trees or limbs also killed a woman in her house, a man standing outside and a motorist in separate locations.

In both Mississippi and Alabama numerous felled trees blocked roads, impeding emergency responders and those trying to leave hard-hit areas.

Austin Ransdell and a friend had to hike out of their neighborhood south of Birmingham after the house where he was living was crushed by four trees. No one was hurt.

As he walked away from the wreckage, trees and power lines crisscrossed residential streets, and police cars and utility trucks blocked a main highway.

"The house was destroyed. We couldn't stay in it. Water pipes broke; it was flooding the basement," he said. "We had people coming in telling us another storm was coming in about four or five hours, so we just packed up."

Not far away, Craig Branch was stunned by the damage.

"Every street to get into our general subdivision was blocked off. Power lines are down; trees are all over the road. I've never seen anything like that before," he said

The weather service didn't immediately confirm that the damage was caused by tornadoes, but forecasters had issued several tornado warnings and said winds blew as hard as 70 mph, just short of hurricane force.

The Arkansas Department of Emergency Management confirmed early Wednesday that another person died in a storm in Sharp County. Officials said the person was in a home near Arkansas Highway 230 but didn't know exactly how the person died.

CBS News correspondent Don Teague reports that at least 60 homes have been destroyed in Arkansas. A county official told Teague Tuesday night the tornado which ravaged Vilonia, Ark., was about half a mile wide and was on the ground for about 11 miles.

Severe storms in northwest Georgia downed trees, blew out windows in a hospital and tore off part of a school roof. Much of north and central Georgia was bracing for another round of thunderstorms and a tornado watch was issued.

In eastern Tennessee, a woman was killed by falling trees in her trailer in Chattanooga. Just outside the city in Tiftonia, what appeared to be a tornado also struck at the base of the tourist peak Lookout Mountain.

Tops were snapped off trees and insulation and metal roof panels littered the ground. Police officers walked down the street, spray-painting symbols on houses they had checked for people who might be inside.

Mary Ann Bowman, 42, stood watching from her driveway as huge tractors moved downed trees in the street. She had rushed home from work to find windows shattered at her house, and her grandmother's house next door shredded. The 91-year-old woman wasn't home at the time.

"When I pulled up I just started crying," Bowman said.

Many around the region were happy to survive unscathed even if their houses didn't. In Choctaw County, Miss., 31-year-old Melanie Cade patched holes in her roof after it was heavily damaged overnight.

Cade was in bed with her three children when the storm hit.

"The room lit up, even though the power was out. Stuff was blowing into the house, like leaves and bark. Rain was coming in sideways," she said, adding that they managed to scurry into a bathroom.

"I didn't care what happened to the house," Cade said. "I was just glad we got out of there."