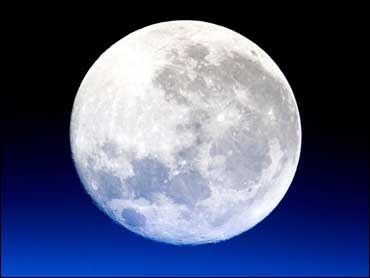 The latest effort by science to answer whether there's ice on the moon has come up empty. There's no sign of a lunar skating rink in the mysterious polar craters — or even a big slab of ice.

The results of the most detailed radar study to date of the moon's shadowy poles don't mean the moon is bone-dry. But the apparent lack of large ice tracts suggests there isn't a big supply of life-sustaining water nearby if people ever wanted to colonize the moon.

"It certainly would have been nice to find some sort of lunar skating rink, or thick layers of ice, but it looks like it's just not there," said Bruce Campbell of the Smithsonian Institution's Center for Earth and Planetary Studies.

Prospector found elevated levels of hydrogen — a component of water — around the moon's poles, with the highest readings in the perpetually shaded craters. But the evidence for ice was indirect.

Subsequent experiments that bounced radio waves off these craters revealed no sign of thick ice layers, although those tests penetrated only a few feet below the surface.

Now, Campbell and colleagues at Cornell University have used the mammoth radar dish at Puerto Rico's Arecibo Observatory to probe craters more deeply than ever before — as far as 20 feet (6 meters) down.

And still there's no sign of thick layers of ice.

Campbell and colleagues at Cornell University say their findings support the idea that any ice in the moon's polar regions is in thin layers or widely scattered crystals mixed in with lunar soil.

The findings appear in Thursday's issue of the journal Nature.

If the moon's poles do have widely dispersed ice, Campbell said that means moon colonists would need equipment to either sort ice particles from the soil or heat up the crater floors and collect the water vapor.

Astronomers have suspected since at least the early 1960s that the moon's polar craters, miles-deep and surrounded by raised rims, could have trapped ice from comet impacts over billions of years.

Temperatures in some craters hover at about minus 280 degrees Fahrenheit (minus 173 Celsius), forming "cold traps" where water could collect even as it escaped into space over the rest of the moon.

Alan Binder, the director of the Lunar Research Institute in Tucson, Arizona, said the new results are consistent with the Lunar Prospector's findings suggesting widely scattered ice, perhaps a few hundred million metric tons of it.

But the only way to know for sure is to send a human or robot. "You've got to go down and stick your finger in it, so to speak," he said.

NASA has no lunar missions planned to address that question, but it is soliciting ideas for lunar spacecraft.