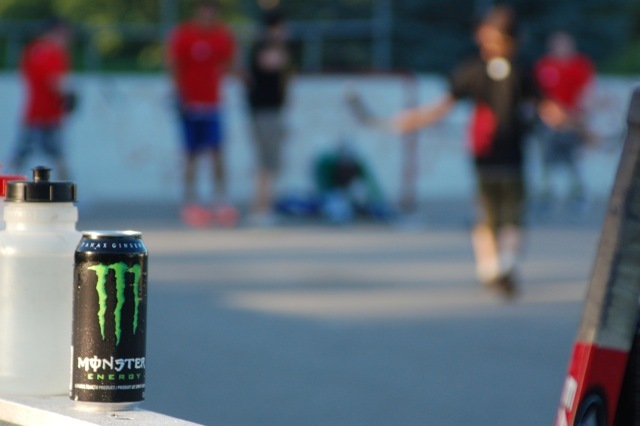 NEW YORK The sell-off of Monster Beverage (MNST) shares deepened Tuesday after Goldman Sachs (GS) removed them from its "Conviction Buy" list following the FDA's confirmation that it is investigating reports of people dying after drinking its energy drinks.

The spark: Goldman Sachs analyst Judy Hong said Tuesday it was removing Monster from the list, a group of stocks the company considers the most potentially profitable for a buyer. But she kept a "Buy" rating, saying that after Monster Beverage's big decline, regulatory and legal risks are already reflected in the stock price.

The background: The FDA is investigating reports dating back to 2004 that claim that people had adverse reactions after they consumed Monster Energy Drink. The drink, which comes in 24-ounce cans, contains 240 milligrams of caffeine. That's seven times the amount of the caffeine in a 12-ounce cola.

The company puts labels on cans that state that the drinks are not recommended for children and people who are sensitive to caffeine.

The inquiry came to light after a wrongful death suit was filed against Monster Beverage last week in Riverside, Calif., by the parents of a 14-year-old girl who died after drinking two 24-ounce Monster Energy Drinks in 24 hours.

At that time the Corona, Calif., company said that that it was "unaware of any fatality anywhere that has been caused by its drinks."

The FDA report comes on the heels of other scrutiny. In August, New York state Attorney General Eric Schneiderman issued subpoenas to energy drink makers, including Monster, as part of the state's investigation of the industry. And in September, Senators Dick Durbin, D-Ill., and Richard Blumenthal, D-Conn., asked the FDA to take another look at the effect that caffeine and other ingredients in energy drinks have on children and adolescents.

The analysis: More attention from regulators and politicians on energy drinks make it harder to predict what Monster Beverage's stock will do over the next few months, and could weigh on shares in the near future, said Hong.

Share action: After a 14 percent drop on Monday, shares fell $5.04, or 11 percent, to $40.69 in afternoon trading Tuesday. Shares have lost a quarter of their value in October. They're off about 11 percent this year.