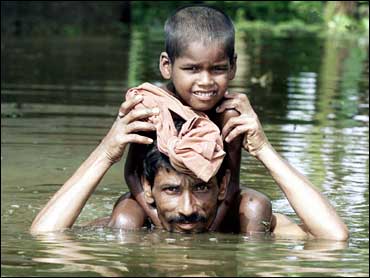 In Assam state, Arun Kalita's home village of Sootea was swept away. He now lives with his wife and four children under a tarpaulin roof, depending on government handouts to stave off hunger.

Kalita is one of the lucky ones — he and his family survived. But he's haunted by the memory of the home he lost.

"We just kept watching from a distance and could do nothing," said Kalita, 57, his voice choked with emotion. "My home now lies on the river bed."

Annual monsoon flooding has wreaked havoc across South Asia, killing more than 900 people in India, Bangladesh and Nepal since June and displacing or trapping about 25 million more.

In Bangladesh, the Flood Forecasting and Warning Center said Friday that heavy rains in parts of the Himalayas could cause the third flooding in the low-lying river delta nation since the monsoons began.

Some of the most isolated victims are here in Assam, along the rugged foothills of the Himalayas. At least 39 people have died and nearly a quarter of the state's 26 million residents are now homeless.

After two weeks of destruction, the rains have slowed and the floodwaters have started receding in much of Assam. But the monsoon-driven weather is unpredictable, and officials worry that intense rains could begin again, raising the water level and bringing more flooding.

This is the way it often goes with the monsoons. Intense rains are drenching some parts of South Asia while other regions are slowly drying out and still others — including 12 states in India — are facing one of the worst droughts in years.

In all, monsoon floods have killed at least 323 people in India, according to official estimates.

Another 157 people have died in neighboring Bangladesh. Water levels in the Ganges, Brahmaputra and Jamuna rivers, which had receded last week, began rising again Wednesday following fresh downpours in the country's north, officials there said.

But the highest death toll has been in the Himalayan kingdom of Nepal, where at least 424 people have either been swept away by swirling floodwaters or crushed under mudslides in remote mountain villages. Rains were subsiding there on Friday.

Relief officials throughout South Asia are now trying to prevent waterborne diseases such as diarrhea and typhoid, which are deadly in impoverished regions.

When the waters come, their destruction is often absolute. In recent days in eastern India, a postman was swept away, a 7-year-old boy drowned and two men died when their boat sank in the Gandak River.

In Assam, thousands of stranded people have started returning to their ruined villages, hoping to rebuild their homes and begin their lives afresh.

The monsoon rains last until late September in this part of India, and with the government lacking the resources to build dams, it is flooded nearly every year.

"There is still some hope for those who have their homes intact. But for the families whose homes have been completely washed away by the floodwaters, life will have no meaning unless the government provides land and money," said Dandi Nath Saikia, headman of Sootea village.

It's the same story for thousands of villages along the Brahmaputra River, which originates in China's Tibet region as the Tsangpo, flows down nearly 500 miles across the Assam plains and into Bangladesh before spilling into the Bay of Bengal.

For hundreds of thousands of people, the river offers livelihood for six months a year. They earn their livings ferrying people from one village to another in mechanized boats, or trading in vegetables and fish.

But with the monsoon rains, the river becomes a destroyer.

In Boralimari, another Assam village, an elder gestures to a spot covered with a small body of water.

"Look, that is the place where our village high school and junior school stood," said Aminul Islam. Now, there is no trace of the buildings.

Mizanur Rahman, a farmer living on a mud embankment in the village of Rowmari, accepts the monsoon misery as part of life.

"I have nowhere else to go," he said. "I hate the floods that come almost every year, but I have to live with it."