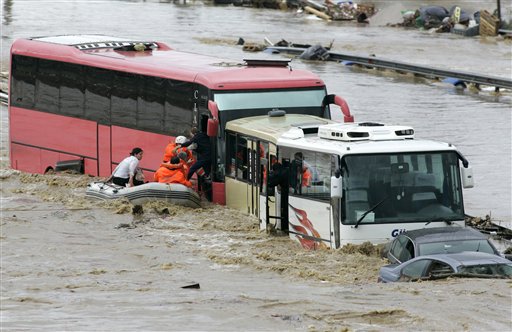 A new book says President Bush's advisers had grave doubts about the early course of the war in Afghanistan and suggests that the ultimate defeat of the Taliban was due largely to millions of dollars in hundred-dollar bills the CIA handed out to Afghan warlords to win their support.

"Bush At War," by Washington Post reporter Bob Woodward, draws on four hours of interviews with Mr. Bush and quotes 15,000 words from National Security Council and other White House meetings in reconstructing the internal debate that led to U.S. military action in Afghanistan and the decision to aggressively confront Iraqi President Saddam Hussein.

The book describes Secretary of State Colin Powell as frequently at odds with Vice President Dick Cheney and Defense Secretary Donald H. Rumsfeld and struggling to establish a relationship with Bush.

The book reports that Bush advisers had deep doubts about their strategy of bombing the Taliban while relying on ground forces from the Northern Alliance.

The CIA spent $70 million in direct cash outlays on the ground in Afghanistan, a figure that includes money for setting up field hospitals.

In the interview in August at the president's ranch in Crawford, Texas, Mr. Bush was reflective about his personal style and ambitions as president, the book says. "Sometimes, that's the way I am - fiery," he said, describing his relationship with his aides, and adding: "I can be an impatient person."

In the interview, Mr. Bush also spoke about North Korea and its dictator Kim Jong Il.

With the administration contemplating a response to North Korea's nuclear weapons program, the president shouted and waved his finger in the air, saying, "I loathe Kim Jong Il."

Mr. Bush said during a February visit to the North Korean border that he had no intention of invading North Korea, but made it clear in the interview with Woodward he is not content with the status quo.

The book portrays Powell as being frustrated with having to pretend that there was a policy consensus within the war cabinet on Iraq and the Middle East. He called it being "in the icebox" during periods when the White House banned him from television.

Since his Watergate collaboration with Carl Bernstein, the 59-year-old Woodward has written a number of books and won his second Pulitzer Prize this year as part of a team of reporters recognized for covering the war on terrorism.

The Post published details from Woodward's new book in its Saturday editions.