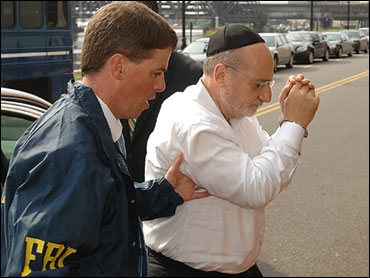 Federal prosecutors say several rabbis in New York and New Jersey are also arrested. One congregant says a synagogue in New Jersey has been raided.

According to the Newark Star Ledger, "the arrests are the result of a two-year FBI and IRS probe that began with an investigation of money transfers by members of the Syrian [Jewish] enclaves in Deal and Brooklyn. Those arrested this morning include key religious leaders in the tight-knit, wealthy communities."

The Monmouth County Prosecutor's Office and the IRS raided a religious school, the Deal Yeshiva, and a nearby synagogue, Ohel Yaacob, according to the paper.

The case against Jewish leaders will focus on a group of rabbis who allegedly laundered tens of millions of dollars through their religious organizations for a fee, according to CNN.

More than two dozen people were brought to the FBI's Newark field office Thursday morning. One agent slowly walked an elderly rabbi into the building.

It's not yet clear how the cases of the rabbis and government officials are connected.