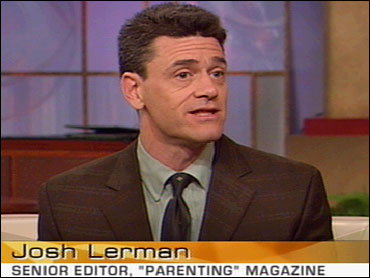 Now that the school year has started, some kids may come home complaining about having a bad teacher. Of course, that could mean a number of different things.

Josh Lerman, the senior editor at Parenting magazine, explained on The Early Show it could be that, for whatever reason, the child and the teacher just don't blend.

The other issue is some kind of incompetence and, in that case, it's not you (or your child) alone. In this case, he suggests talking to other parents to figure out what the problem is.

"Your child can't tell if a teacher is competent. You're the only one that can make that judgment," he said. And since it is unlikely that a 6-year-old could tell if the teacher is not qualified, the personality clash is probably the issue parents will have to help their child deal with.

Here is what Lerman says parents can do to help their children:

Get your facts straight
"Your child is unlikely to come home and say, 'I'm a little upset because my teacher is quite strict and that upsets me,' " he said. "Chances are your child will say, 'I have a sore throat, I can't go to school.' Then you have to ask a series of questions, 'What's wrong?' It turns out that 'The teacher was mean to me.' You have to figure out what's going on.

"Was the teacher mean or saying, 'You have to do better next time on the test.' It's not because your child is a liar. It's because they're little people and things get twisted inside their head."

If you are still not certain of how your child is being treated, he suggests talking with other parents of kids in the class. "Ask them, 'Has your child said anything about Mrs. Grumpky?' "

"If you're furious, it wouldn't hurt to have someone else in the meeting to calm you down. But if both parents go it implies a more serious issue, so if you are just fact-finding it's OK if only one parent meets with the teacher.

"You want to give the teacher a way to let it go to the next level without them feeling like you're going over their head. So you might say, 'What can we do about this?' Or "It sounds like we're still seeing things differently, so what do you suggest we do next?' That way it's not like you're going to the principal. And if the teacher isn't responsive, then you can go over her head. You can tell a lot by what she says. If she's defensive and confrontational through the entire meeting, then you're not getting the information you need and you have to take it to the next level."

Enlist the school's help
"The school has seen a lot," Lerman said. "They've seen a lot of whiny parents and whiny kids and a lot of kids that act up. If you go in there as a whiny parent, they're not going to take you seriously. If you go in there as someone concerned about your child's education, who wants to work with the teacher to make everything turn out right, they're going to take you seriously, and be straightforward, and see what they can do to help."

As an example he said "a teacher may feel that depriving all the kids of playground time when one acts out is appropriate, even if you disagree. You can then quietly find out what the school's policy on discipline is — maybe it's something like 'We don't punish groups for the behavior of one person.'

"And some schools have stated philosophies about how students are to be treated and the treatment of that teacher may go against it. Maybe it's not the kind of thing you can take action on (especially if the school policy supports the teacher's actions) but you can at least start a conversation about it at the PTA or in the school community."

So when should parents take their children out?

"That's going to be a personal judgment call based on your child, based on the teacher, based on the things the teacher is doing also that you think might be damaging to the child," he said. "If it's just a shy child with a tough, strict teacher, depending on the age of the child, you might decide, my kid has got to get used to it, they're not always going to have nice teachers and meet nice people. The guy at the deli is not going to always be nice. They have to get used to it. But if it's in the way of their education, that should be the primary issue, is your child able to learn?"

If you decide to have your child continue learning with the same teacher, he said it is important for children to understand that they are not always going to be happy about the things that happen at school.

"You can point out, you don't always want to do your homework but you have to do it anyway," he said.