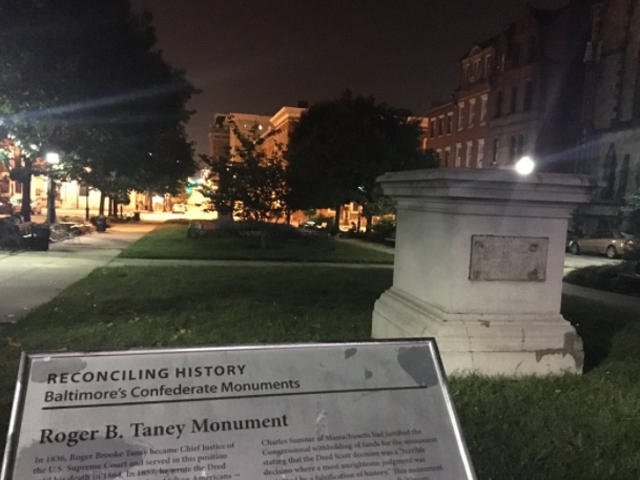 Cities and states accelerated their plans to remove Confederate monuments from public property Tuesday as the violence over a Robert E. Lee statue in Charlottesville, Virginia, moved leaders across the country to plan to wipe away much of the remaining Old South imagery.

The Baltimore City Council passed a resolution Monday calling for the immediate deconstruction of the monuments.

In Birmingham, Alabama, workers covered the Confederate Soldiers and Sailors monument late Tuesday night, reports the CBS affiliate there, WIAT-TV. Mayor William Bell ordered the move to give the city time to explore the legality of removing it.

The United Daughters of the Confederacy markers commemorate the spot where the Virginia-born Lee is said to have planted a tree while serving in the U.S. Army at Fort Hamilton in the 1840s. Two decades later he became commander of the Confederate Army of Northern Virginia.

In Gainesville, Florida, on Tuesday, the Daughters of the Confederacy removed a statue of a Confederate soldier known as "Ole Joe," and in Durham, North Carolina, protesters used a rope Monday night to pull down a Confederate monument dedicated in 1924.

The anti-Confederate momentum seemed to ensure that other memorials would come down soon.

Many other local and state governments announced that they would remove statues and other imagery from public land, or consider doing so, in the aftermath of Saturday's white nationalist rally that killed one person and injured dozens more.

The changes were publicized as President Trump defended Confederate statues in wide-ranging remarks.

"This week it's Robert E. Lee. I notice that Stonewall Jackson's coming down," Mr. Trump said during a visit to Trump Tower in New York. "I wonder, is it George Washington next week, and is it Thomas Jefferson the week after? You know you really do have to ask yourself, where does it stop?"

Asked specifically whether Charlottesville's Lee statue should come down, he said: "I would say that's up to a local town, community or the federal government, depending on where it is located."

All around the country, Republican and Democratic officials at the state and local levels moved swiftly to begin a process to remove the statues.

North Carolina Gov. Roy Cooper said he would ask the Legislature to reverse a 2015 law signed by his Republican predecessor, Pat McCrory, that prevents the removal or relocation of monuments, and to defeat a measure giving immunity to motorists who strike protesters. He also planned to ask state officials to determine the cost of moving Confederate statues and to give him options of where they could go.

"Our Civil War history is important, but it belongs in textbooks and museums?- not a place of allegiance on our Capitol grounds," Cooper said in a statement.

In Maryland, GOP Gov.  Larry Hogan said Tuesday he would push to remove the statue of Taney from state land.

"While we cannot hide from our history, nor should we, the time has come to make clear the difference between properly acknowledging our past and glorifying the darkest chapters of our history," said Hogan, who before had resisted calls to move the statue.

Dallas Mayor Mike Rawlings announced plans Tuesday to ask his city council to appoint a task force to study the fate of the city's Confederate statues. Rawlings said he personally finds the monuments to be "dangerous totems," but a task force would ensure a productive conversation.

Tennessee Gov. Bill Haslam, a Republican, called on state officials Monday to remove a bust of Nathan Bedford Forrest, a Confederate cavalry general and an early leader of the Ku Klux Klan, from the Tennessee Capitol. Protesters earlier draped a black jacket over the head of the bust while cheering, "Tear it down!"

Similar plans were being made in San Antonio, as well as Lexington, Kentucky; Memphis, Tennessee; Jacksonville, Florida; and elsewhere.

In Durham, Sheriff Mike Andrews said protesters who toppled a nearly century-old Confederate statue in front of a North Carolina government building would face felony charges. The Confederate Soldiers Monument, dedicated in 1924, stood in front of an old courthouse that how houses local government offices. The crumpled and dented bronze figure has been taken to a warehouse for storage.

Deputies later arrested Takiyah Thompson, who identified herself Tuesday as the woman who tied the rope that was used to tear it down. She said her actions were justified because Confederate statues represent white supremacy.

A law professor and director of the Center for Terrorism Law at St. Mary's University in San Antonio called removal a "slippery slope," saying judging historical figures through a modern lens can be difficult.

"A healthy democracy and people within that democracy should be able to say, 'This is our history.' And history is made up of actions of human beings, and human beings aren't perfect," said Jeffrey F. Addicott, who stressed he was speaking for himself and not the law school.

Statues, he added, can be moved, but he's opposed to them being "put in a warehouse never to be seen again because then you're kind of erasing or rewriting history."

The Sons of Confederate Veterans condemned attempts to take down Confederate statues around the country.

"These statues were erected over 100 year ago to honor the history of the United States," added Thomas V. Strain Jr., the group's commander in chief. "They're just as important to the entire history of the U.S. as the monuments erected to our forefathers."

Strain, who said his group did not participate in Charlottesville, condemned the Klan, white nationalist groups, neo-Nazis and other extremists.

"It's painful to watch for lack of better words," he said. "It was our family that fought, and it was our families that died, and now we have these knuckleheads hijacking the flag for their own purposes."

But city and state officials said Charlottesville convinced them it's time to move on from having Confederate imagery in prominent public places.

In Lexington, Kentucky, Mayor Jim Gray moved up his announcement by a day in reaction to the Charlottesville bloodshed. Memorials to John C. Breckinridge and John Hunt Morgan are perched outside a former courthouse that was the site of slave auctions before the Civil War.

"This is the right time," Gray said Monday. "We accelerated that because of the events in Charlottesville, but I knew that it was the right thing to do."