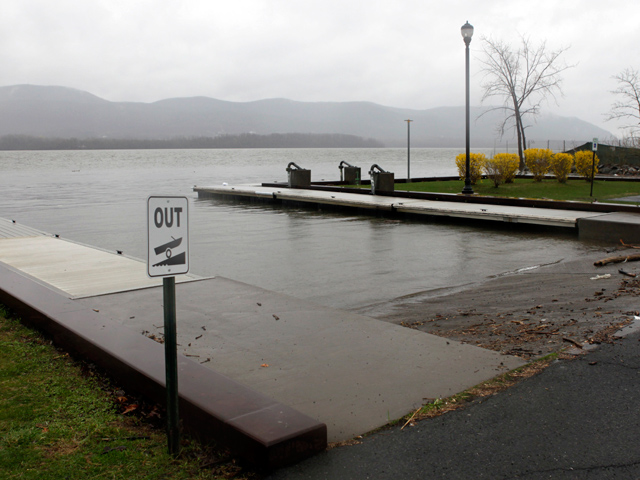 NEWBURGH, New York -A woman who had just been involved in a domestic dispute loaded her four children into a minivan and driving it into the Hudson River, killing herself and the three other children, firefighters said.

A 10-year-old boy escaped from the van and ran to a nearby fire station and alerted firefighters, Chief Michael Vatter said. The boy told firefighters his mother had driven off a boat ramp in Newburgh, about 60 miles north of New York City, and into the murky water of the river, Vatter said. Inside with her were the boy's siblings: two boys, ages 5 and 2, and an 11-month-old girl.

Firefighters and police officers responded with boats. Divers searched for the minivan for about an hour before finding it submerged in 10 feet of water about 25 meters offshore. They used a heavy-duty tow truck to pull it up the boat ramp and onto land.

Everyone inside was dead, Vatter said.

The woman lived about six blocks from where she and her children perished, he said. Their names have not been released.

The unidentified woman lived in an apartment in a gritty part of this humble river city. Several neighbors on Wednesday recalled her as an attentive mother who balanced care of her children with an outside job. They were shocked by the news.

"She was a very good mom," said Tina Claybourne, who lives nearby. "She took care of her kids. She always was with her kids."

Neighbors said they did not know the woman's name or where she worked. They said the children seemed energetic and happy and would play on the block and ride bikes.

"You know kids, they make noise, they play around," said Shantay Means, a downstairs neighbor.

The domestic altercation occurred about 10 minutes before the woman drove into the river, said Vatter, who didn't have any more information on it. The concrete ramp was just a few blocks from her apartment.

The boat ramp was unguarded by gate or chain. There was no sign that anything tragic had happened save for a single teddy bear left at the end of a dock that runs alongside the boat ramp.

Newburgh, which has about 30,000 residents, sits on the western shore of the part of the river that runs south through New York state and eventually splits New York and New Jersey.

A similar incident occurred in 2006, about 20 miles south of Newburgh.

In 2007, Victor Han, of Queens, was sentenced to three years of probation after pleading guilty to child endangerment. Han admitted he knew he was putting his daughters at risk when he stepped out of the family minivan on Bear Mountain in June 2006, leaving them with their mother, 35-year-old Hejin Han. She then drove the Honda Odyssey off a 300-foot drop, killing herself. The mother was killed but the children somehow survived the plunge.

It's also reminiscent of the case of a South Carolina woman who drowned her young sons in 1994.

Susan Smith is serving a life sentence for killing 3-year-old Michael and 14-month-old Alex by strapping them into their car seats and driving the car into a pond. Smith originally claimed she was carjacked before the truth came out.