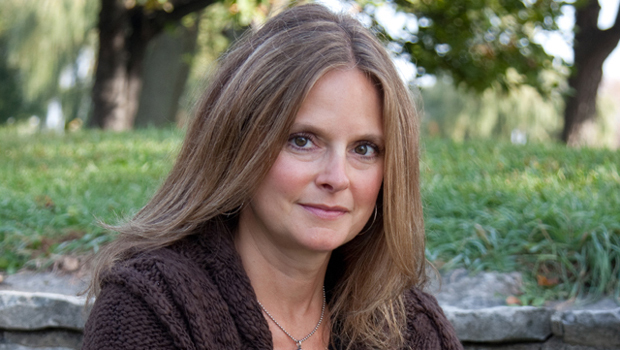 (CBS) Suburban Chicago mom Brenda Wilhelmson is like many mothers with their kids headed off to college.

Her 18-year-old, Max, whom she calls a "straight arrow," is headed to Northern Michigan University next year.

"It's a whole other ball game," Wilhelmson says of her son's college life.

But she's perhaps more concerned than other parents about one thing: alcohol abuse.

Wilhelmson says she's talked with Max and her 10-year-old son, Van, about alcohol and substance abuse many times as they've grown up.

But will it be enough? Will Max decide to drink? Will he do drugs?

Wilhelmson says she's tried to teach him and talk to him. But perhaps her life's example is the best warning - and hope - for her son:

Wilhelmson is an alcoholic. She doesn't shy away from this fact. She readily notes that - even after eight years of solid sobriety - she still sometimes gets distracted at the thought of wine if she sees a stemmed glass in the dishwasher.

However, this mother of two and journalist, who has written for the Chicago Tribune, isn't what she'd call "your typical alcoholic." She calls herself a "high-functioning alcoholic."

If you're not familiar with that term, you're not alone. Wilhelmson says they're a largely unrecognized group of people - moms, dads, your friends and family - who struggle with alcoholism, but often do not seek or receive treatment because their lives seem so together - most of the time.

She said in a recent interview with "Eye on Parenting," "(A high-functioning alcoholic is) somebody who hasn't had a lot of consequences. They're people who have jobs; we haven't lost our children; we haven't lost our driving privileges. Everything looks pretty good on the surface."

Eight years ago, Wilhelmson had that normal surface, but underneath it, she was sinking.

"People who know me didn't know I was an alcoholic -- had no idea," she recalled.

But she knew it.

She said her life, in her own words, was "pathetic."

"I was so sick and tired of the way I was living my life," she said. "I was numbing myself up like a zombie every night and waking up in the morning feeling like garbage."

So she decided to turn things around - and write about it.

Wilhelmson initially put her thoughts in a journal, then blogged them. She eventually edited the online entries together for a book called "Diary of an Alcoholic Housewife." The book, to be released today, April 1, charts her very personal struggle as a mom, wife and friend over a 15-month period of trying to get sober - for good. At the time, her sons were ages 2 and 10.

Though it might not seem possible to some parents, Wilhelmson assures readers in her book that she was a "normal" parent - even when she was drinking.

'I did all the mommy things," she told "Eye on Parenting."

Even after a long night of drinking, Wilhelmson recalls that she got up to attend to her family's needs.

"I made breakfast," she said. "I drove my kids to school. ... (I) schlepped them to various activities."

She says she hid her addiction from many people in her life, including her kids.

But her kids, she said, were learning something was wrong.

Wilhelmson explained, "(My son Max) was getting a big anti-drug message at school. We would sit down to dinner, and I was drinking. He started questioning. ... He would say, 'It ruins your brain.' I would tell him, 'Anything in moderation is fine.' I knew I wasn't drinking in moderation. ... Every time we had that conversation, it bothered me."

But there were other times when she saw something was wrong that her kids didn't see. She remembers coming home from parties to find her fancy glassware - martini and wine glasses - in their bedrooms. The children had played with them.

"They were mimicking our behavior," she said. "... My kids saw me drinking all the time in the evening. ... I was setting a horrible example. I knew I was. I thought I was condoning the drinking and telling my kids drinking was OK."

And then she changed things for herself and for her kids.

In fact, Wilhelmson says being a parent helped her realize she was an alcoholic. During her first year going in and out of recovery, she said she made sure to remind herself that a piece of the reason she had her second child was to stop drinking during the pregnancy.

She said, "Normal drinkers don't do that."

Wilhelmson began attending alcoholic meetings. She and her husband, Charlie, began meeting other people that don't drink. They moved on and she stayed sober.

But today, she doesn't downplay what could have happened to her and her kids had she continued to drink.

"I had a higher bottom," she said. "... I could easily drive in a blackout. ... As far as drinking myself to death, no, but getting into a car crash - that is within the realm of possibility. I was fortunate that I didn't have a drunk driving consequence."

As for her kids, she says she got sober at just the right time. She says she's seen the effects of alcohol in her former drinking friends' kids' lives today.

Wilhelmson said, "I feel like I got sober at a really critical time in (my son's life) and I wonder if he would be drinking today if my husband and I were really heavy partiers. Because the other three couples in the book, their kids are all into drugs."

When asked by "Eye on Parenting" what advice she could give to parents, she urged parents to be role models for their kids.

"Actions speak louder than words," she said. "I think if your actions don't match your words, they don't mean anything. ... If they don't see you manifesting that behavior yourself, those words are meaningless. ... That's huge. Like attracts like. If you want to see certain behavior in your child, you have to model that behavior."

Today, Wilhelmson is living a life worth imitating.

"I love my life today," she said. "When I was drinking, I was always talking about writing a book. I never wrote a book. Now I have this book. I wanted to have a horse, but I was too busy or too drunk to have a horse. I have a horse today. ... There are so many rich, wonderful things in life that I never would have experienced if I would have still been on the couch with my glass of wine."

She adds, "It's awesome being present, instead of being anesthetized. I have a quality life today; I didn't when I was drinking."

As for her son Max, Wilhelmson says he knows what he's up against in college - and in life.

"He knows that his genes are stacked against him," she said. "... He has alcoholism on both sides of the family. ... We've talked about it a lot. But I've never had to have the conversation 'you're loaded' or 'you're drunk.' He's not had a drink or a drug yet."

From us at "Eye on Parenting": Best of luck to Max - and congratulations to Brenda Wilhelmson on her book and continued sobriety.

If you're struggling with alcohol, you may find these resources helpful: