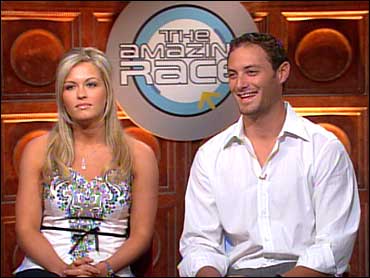 It's down to the final three teams on "The Amazing Race 9."

Dating couple Monica and Joseph lost their "MoJo" on the episode that aired Wednesday night.

As Monica Cayce, a 23-year-old student from Fayetteville, Ark., and Joseph Meadows, a 23-year-old home builder from Fort Smith, Ark. got the gate, the team consisting of friends Eric and Jeremy regained the lead in a leg run in Bangkok, Thailand.

But it appears to have been a happy ending in any event for Team Mojo.

Joseph told CBS News, "It made our relationship better. It proved to me that I loved her."

Monica concurred, noting, "Nothing can bring you closer then going through stressful situation and loving it. We had fights, but we never got nasty or called each other names."

Monica graduates Saturday from the University of Arkansas. Then, she says, she'll "start working with Joseph building of houses and apartments."

They both made their final pitstop on The Early Show Thursday, co-anchor Rene Syler.

According to the official "Amazing Race 9" "Web site, "After starting another leg with no money and possessions, best friends BJ & Tyler battled back into first place to earn a spot in the finals as the Teams traveled to exotic Thailand. Dating couple Joseph & Monica recovered from an early mistake that put them in last place, but a meltdown from Monica at the Detour led to their demise as they became the last Team eliminated from THE AMAZING RACE.

"… With friends Eric & Jeremy securing their spot in the finals with a second place finish, only dating couples Ray & Yolanda and Joseph & Monica remained in the field battling for the last spot. While MoJo had a fast taxi driver, in the end it wasn't enough, as a relieved Ray & Yolanda stepped onto the mat in third place. The couple received even better news as they had the winning golden Travelocity gnome. For this gnome, the couple won a cruise around Sydney Harbor on a luxurious yacht, which also includes exploration of the wine district of Australia and the Great Barrier Reef. In addition, they would be spending the night near the Pit Stop at a luxurious hotel.

"Stepping onto the mat in last place, dating couple Joseph & Monica received the bad news from Phil that they had been eliminated from the Race. Through her tears, Monica remarked on her partner, 'What I really took away from all this is how much he supported me. Joseph really is my rock and I could not have gotten through this without him.' Joseph added, 'Monica being there right by my side helps me go on. We're definitely going to get married one day and have a family.' Monica ended by noting, 'We have each other when we get home and we have this Race to look back on for the rest of our lives. It's such a beautiful gift.' "