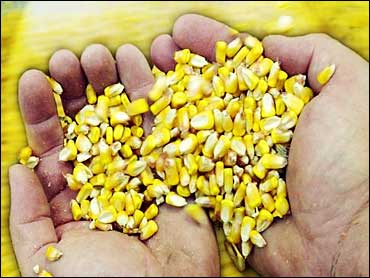 Ancient Americans were changing corn genes through selective breeding more than 4,000 years ago, according to researchers who say the modifications produced the large cobs and fat kernels that make corn one of humanity's most important foods.

In a study that compared the genes of corncobs recovered in Mexico and the southwestern United States, researchers found that three key genetic variants were systematically enhanced, probably through selective cultivation, over thousands of years.

The technique was not as sophisticated as the methods used for modern genetically modified crops, but experts said in a study released Thursday that the general effect was the same: genetic traits were amplified or introduced to create plants with improved traits and greater yield.

The ancestral plant of corn, teosinte, was first domesticated some 6,000 to 9,000 years ago in the Balsas River Valley of southern Mexico, the researchers said in this week's issue of Science magazine. At first, teosinte was a grassy-like plant with many stems bearing small cobs with kernels sheathed in hard shells.

By cultivating plants with desirable characteristics, farmers caused teosinte to morph into an increasingly useful crop. The researchers said by 5,500 years ago the size of the kernels was larger. By 4,400 years ago, all of the gene variants found in modern corn were present in crops grown in Mexico.

The plant and its grain were so changed by the directed cultivation that it evolved into a form that could not grow in the wild and was dependent on farmers to survive from generation to generation, the study found.

The study was conducted by researchers at the Max Planck-Institute for Evolutionary Anthropology in Leipzig, Germany; the U.S. Department of Agriculture at North Carolina State University, Raleigh, N.C.; the Smithsonian Institution in Washington; the University of Oxford in the United Kingdom; and the University of Wisconsin. It was financed by the Wellcome Trust, the U.S. National Science Foundation, the German Ministry for Education and Research, and by the Max Planck Society.

Fedoroff, a plant geneticist who was not part of the research team, said the study shows that it is unlikely the changes in corn were by chance.

The early farmers, she said, "might have been more sophisticated than we think."

"The differences between maize (corn) and teosinte come down to just a few genes, but with big effect," said Fedoroff. She said ancient farmers probably spotted these differences and then planted seeds from those cobs to encourage the improvements to continue.

"They might have collected the seeds and may have known that if they grew them close together then they could catch (the beneficial changes) in the next generation," she said. "It was like someone found the right combination and it was so much better that people shared it with their friends and relatives and then it got widely propagated."

Three genes that dramatically improved corn came together within a short time and the farmers were sophisticated enough to propagate seeds from those plants in following seasons, it's believed.

One gene changed the architecture of corn from a plant with many branches to one with a single stalk with a male tassel at the top and female cobs growing along the side.

Another genetic change softened the outer hull on the kernel. Before the change, the plant depended on animals to spread its seeds. After animals ate the corn, the tough outer shells would allow the kernels to pass unharmed through the gut.

With a softer hull, the kernels would not survive passage through the gut of an animal. As a result, the plant became dependent on farmers to spread its seeds.

Another genetic change caused the kernels to stick more tightly to the cob. And still another change modified the starch of the grain.

This final change, the authors wrote, made the corn more suitable for making tortillas, and, thus, may have been an early variant encouraged by the farmers.

Scientists now change plants by transferring specific, identified genes from species to species in sophisticated labs. Some advocacy groups have claimed this technique is dangerous. As a result, some European and African countries forbid the import of "GM crops."

But Fedoroff said that, actually, the whole world eats genetically modified foods. She said that over thousands of years, rice in China, wheat in the Middle East and corn in Mexico were all genetically altered through selective cultivation. The effect, she said, was like "a prehistoric Green Revolution."

The same process is under way now, she said, but with modern scientific techniques.

"People are fearful of the food they eat," said Fedoroff, "but civilization has been built on genetically modified plants. We wouldn't have civilization without it."