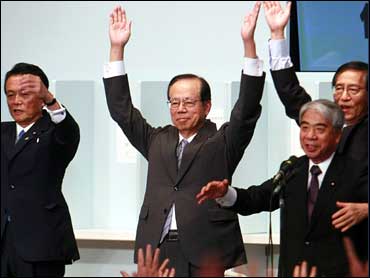 The moderate veteran politician Yasuo Fukuda easily won election as president of Japan's struggling ruling party on Sunday, assuring his selection as the new prime minister in a parliamentary vote later this week.

Fukuda, 71, the son of a prime minister from the 1970s, has vowed to keep his country in the fight against terrorism, improve relations with Asia and address inequalities in the world's second-largest economy.

Fukuda vowed on Sunday to rebuild the popularity of the Liberal Democratic Party, which has suffered a year of scandals and policy missteps by outgoing Prime Minister Shinzo Abe, who has been hospitalized since announcing on Sept. 12 that he would resign.

"You have chosen me even though I do not have much experience. I am prepared to do my utmost to live up to my responsibilities," Fukuda said. "I will work to revitalize the LDP, to win back public trust, and push forward with my policies."

The parliament was scheduled to vote on Tuesday, but Fukuda was guaranteed to win because of the LDP's vast majority in the lower house, the more powerful of the two chambers.

Fukuda's key policies include engaging North Korea diplomatically, pushing for extension of Japan's naval mission in support of U.S.-led forces in Afghanistan, and giving aid to rural regions left behind by the economic recovery.

"We need to show our intention to continue the mission as a message to the international society," Fukuda said of the Afghan mission, which the opposition has vowed to defeat in parliament. "If this drags on too long we might send a wrong message to the world as if we were not committed to making that contribution."

Fukuda, who served as chief Cabinet secretary from 2000 to 2004, has the support of the major factions of the LDP. His dominance over Aso, a hawk who served as Abe's foreign minister until August, was so clear by Sunday that morning papers had already given him the title of LDP president, and he was asked on NHK if he would choose Aso as his foreign minister.

Fukuda will inherit a political environment and a party left in serious disarray.

Abe, 53, came into office a year ago with high support ratings and unquestioned ruling coalition dominance in parliament.

But he quickly frittered away those advantages as his Cabinet overflowed with money scandals and he pressed ahead with a nationalist agenda while people demanded more attention to bread-and-butter issues such as pensions.

The LDP suffered a serious blow in elections in July for the upper house of parliament in which the resurgent opposition seized control of the chamber, heightening calls for snap elections for the lower house as well.

Abe apologized to the party in a message read after Fukuda's selection, but said he would not resign as a lawmaker.

"I apologize to Aso and all LDP lawmakers, party members and the Japanese public for causing a political vacuum," said the note.

Fukuda has arrived as an antidote to Abe. A sober, brainy party elder, Fukuda has vowed to concentrate on down-to-earth issues such as economic equality and growth, while seeking warmer ties with the rest of Asia.

It was unclear however, how long Fukuda would be able to stave off calls for lower house elections. He has termed such calls "understandable."

Media reports said the LDP wanted to pass the Afghan measure and the national budget early next year before dissolving the lower house.

"When the public and lawmakers strongly voice a need to dissolve the parliament, I think it wouldn't be good to resist that call," Fukuda said on NHK.