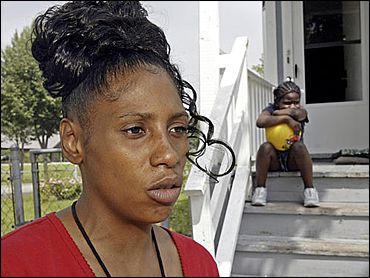 When a gang of youths used rakes, shovel handles and tree limbs to bludgeon a man to death nearly two years ago, the attack seemed like an aberration — even for a sinking part of town known for drug deals and decaying houses.

Then last week, the neighborhood saw another explosion of mob fury: Up to 20 people beat 14-year-old Tyrin D. Douglas with such relentless force that they cracked his skull and left him in a coma.

For many residents, the attacks reveal a community on edge, a place where the pettiest of slights can unleash ferocious vendettas.

"It's still the same mentality around here," said Kimberly Chaplin, 34, who manages an apartment building in the neighborhood on Milwaukee's North Side. "Everyone is out to get everyone."

Last Thursday's assault started when Douglas got into a shoving match in a park with a younger boy, who ran to older relatives for help. In the ensuing violence, a man in his early to mid-20s hit Douglas over the head with a piece of wood.

The mob attack in September 2002 had similarly trivial beginnings — with the victim, 36-year-old Charlie Young Jr., chasing a 10-year-old boy who had hit him with an egg.

An older boy intervened and Young punched him, knocking out a tooth. That unleashed a pack of neighborhood boys on Young. They caught up with him on a porch and beat him so thoroughly that blood was left spattered on the ceiling.

Twelve juveniles and three adults were prosecuted in the case; most ended up with prison terms.

Police Chief Nannette Hegerty, Mayor Tom Barrett and other community leaders met Monday to discuss the Douglas beating as well as the fatal group beating on July 4 of a 54-year-old man with schizophrenia.

Police believe about 10 young men robbed and killed David Rutledge Jr. on a sidewalk near a Milwaukee home for people with mental and physical disabilities where Rutledge lived.

No arrests have been made in either of this month's mob attacks, which authorities do not believe are connected. Douglas' condition has not improved since Thursday, police said.

Chaplin blamed much of her neighborhood's problems on parents.

"There are a lot of people who smoke, do drugs and drink and they don't want to deal with children," she said when interviewed within sight of the spot where Douglas was beaten.

Hegerty said community patrols will be increased and more investigators will be assigned to both the Douglas and Rutledge cases.

Barrett said he and the police chief were planning to visit the neighborhoods.

Douglas' sister, Kendra, 22, said she had been taking care of her brother, who had been in a neighborhood school's day recreation program for about a week before the beating.

The neighborhood was quiet Monday afternoon, with some kids riding their bikes on sidewalks.

Johnson Park, where Douglas was attacked, stood mostly empty, with no one on the purple, green and yellow jungle gym.

Tiana Saffold, 34, won't let her two daughters go to the park unless other children are playing there.

"It hurts. We've never felt so unsafe before," said Saffold, who has lived within a block of the park for 7½ years.

Barrett said the victims aren't just Douglas and Rutledge, but residents who are trapped by fear.

"The victims are also the young kids in this neighborhood and the senior citizens who are afraid to come out of their homes," he said.