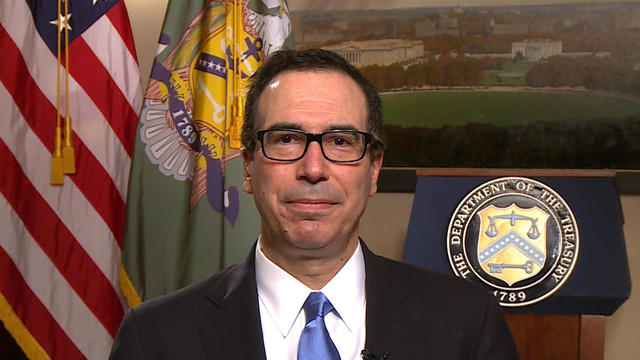 After unveiling a plan that is described as potentially being "historic tax cuts" but with few details at the White House on Wednesday, Treasury Secretary Steve Mnuchin says President Donald Trump is committed to creating economic growth for the American people.

While the details into just how the American taxpayer is expected to pay the estimated $7 trillion cost have yet to be ironed out, Mnuchin, speaking to "CBS This Morning," says the cuts are going to be paid for by "economic growth and a reduction of many deductions in special interest."

"We feel confident that we can get to at least 3 percent economic growth on a sustained basis," said Mnuchin.

When asked just what impact the cuts are going to have on deficits over a 10-year period, Mnuchin said that the president is "very concerned that the debt has grown from 10 to 20 trillion dollars under the last administration and that's something we are very conscious of.

Mnuchin added, "as we go through the details of the plan we'll be comfortable that we can pay for most of the plan. And that's something we will be looking at when we report the 10 year numbers."

Mnuchin echoed similar sentiments from Wednesday's unveiling, saying that the objective is focused on tax simplification.

"We're committed to keeping charitable deductions and mortgage interest but everything else is on the table and this is about tax simplification. It's also about creating economic growth and having people invest," said Mnuchin.

The secretary was pressed on whether or not the tax cuts are for the benefit of the rich, creating an uphill battle in Congress.

Mnuchin said he feels confident that the administration has Republicans in Congress on board with the proposal in place, saying "the good news is conceptually we all agree on the plan and we're committed to work out the details together."

Does your pet need protection from dog flu?