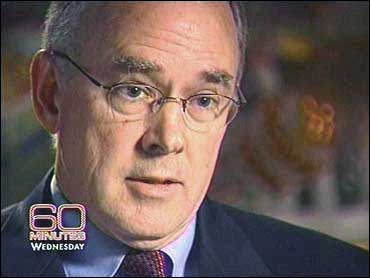 When Jose Canseco told last Sunday that he used illegal steroids throughout his career, and that he'd introduced at least five teammates to those drugs, he focused a spotlight on something Major League Baseball hoped would stay in the shadows.

All the players Canseco accused of joining him in steroid abuse categorically deny it. But Canseco, and others in the game, say that organized baseball knew all about steroid use, and turned a blind eye to it.

Now, in an interview with Correspondent Mike Wallace, Major League Baseball and Canseco try to answer the question: What did baseball know about steroid use, and when?

The former American League Most Valuable Player hit 462 home runs in his 17-year career. He says he was using steroids all that time, and it was no secret.
"They knew what I was doing. They knew what the other baseball players were doing, if they were involved in taking steroids," says Canseco. "Owners knew it. Players Association knew it."

"I'm not here to suggest that there wasn't a sense that, you know, from an anecdotal standpoint, that was something going on in the case of some individuals. But the notion that, as an institution, baseball was aware of a problem is just not true."

Alderson has known Canseco for years. He was general manager of the Oakland A's when Canseco was on the team.

Did he think that Canseco was taking steroids? "I had suspicions, over time, that he might be," he says.

Did he talk to Canseco about it? "No," says Alderson. "There were a number of occasions when he publicly denied that he was using steroids. And you know, the notion that he was going to admit to me what he had already denied on many occasions, I think was not likely."

But Tony La Russa, who managed the Oakland A's when Canseco played there, told Wallace that Canseco bragged about steroids, saying he didn't need a lot of work in a gym in order to build his strength.

"He would laugh about the time that other guys were spending there, and how he didn't have to, because he was, he was doing the other 'helper,'" says La Russa. "He was having help in a different way. You know, the easy way. "

"He would kid our players. You know, it was a joke with him [using anabolic steroids]," adds La Russa. "Our players knew it. I mean, our players believed him."

But Alderson told 60 Minutes Wednesday that came as news to him.

"You're the general manager," says Wallace. "He's the manager. Why wouldn't he tell his boss?"

"That's a question, I guess, you'll have to ask Tony," says Alderson.

There were lots of questions baseball didn't ask about steroids for years, even as players bulked up and broke records. Baseball didn't even begin testing players for steroid use until 2003. Every player was tested at least once, but names were not attached to the results, so no one was penalized for testing positive.

What did they find? That up to 7 percent of them, more than 80 players, were using the illegal drug.

But one FBI agent says he tried to warn baseball about steroids long before that. Agent Greg Stejskal told Wallace that he called Kevin Hallinan, security chief for Major League Baseball, 10 years ago. He says he told Hallinan that Canseco and other players were using illegal steroids.

In any case, although steroid use has long been illegal, baseball has never moved against a drug user.

Has any Major League Baseball player ever been suspended or penalized for using steroids?

"I don't think so," says Alderson.

"It does sound sort of strange," says Wallace.

"Well, until you have a basis for corroborating what are allegations, or accusations, or anecdotal pieces of information, it's a little hard to start prosecuting people or imposing consequences," says Alderson.

La Russa also said there was no point in complaining about steroid use by Canseco, or any other player, because they were protected by the Players' Union.

Why would they rebuff it? "Why does the Player Association do things that is really not in the best interest of the game as a whole? They're really concerned with their constituents," says La Russa. "They've really gotten kind of short-sighted on the steroid issue."

"My understanding is that, and certainly my sense of the union over the years, is that, you know, privacy has been a major issue for them," says Alderson.

What does he mean by privacy? "It's none of your business. It's what, this all started before the performance-enhancing drug issue arose, in connection with recreational drugs," says Alderson.

Donald Fehr, head of the Players' Union, declined to talk to 60 Minutes Wednesday. But he said in a statement that: "Players have taken a series of significant, substantive actions in recent years to prevent illegal steroid use."
He's referring to baseball's new testing policy, which begins in spring training.

"We have a testing program today, which, I understand, certain people quibble with. But, to me, it's a tremendous stride in the right direction," says Alderson. "And we're going to have testing. And those that test positive are going to be publicly disclosed."

There was no deterrent when Canseco was using steroids back in the late '80s. He says many other players got interested in 1994, when an unpopular strike cut the season short.

Baseball, Canseco said, needed to bring fans back. Help came from sluggers like Mark McGwire and Sammy Sosa, who raced to smash Roger Maris' legendary home-run record of 61 in one season.

"After the strike, I think Major League Baseball needed a shot in the arm," says Canseco. "And they got it with Mark McGwire, the Sammy Sosa show. The owners said, 'Wow, this is good.'"

And, Canseco says no one was willing to break baseball's code of silence on steroids. "Who was to lead the way? Who was to make that first step, and put their career in jeopardy," says Canseco. "Or not even that, Major League Baseball in general in overall jeopardy? Who really wanted to take that stance? It's a tough position. Very delicate position."

"At some level, everybody in baseball benefited from steroid use. Everybody -- players, the writers, the fans, the owners," says sports reporter Howard Bryant, who has covered baseball for six years. He's now writing a book about what some call baseball's "Steroid Era."

"Everybody rode along. Because the owners made more money than they'd ever made before, the players saw the advent of the $20 million ballplayer," says Bryant. "The writers got to cover stories that they had never envisioned, of record-breaking seasons. The fans bought more tickets than they ever had in any 10-year period in the history of the game."

Alderson acknowledges the steroid scandal is a problem for all players. What does this do to the record books of baseball?

"On the other hand, at this point in time, there is no factual basis on which any of those records can be reviewed. Now, as time goes on, the public will draw it's own conclusion."

Should records made in the last decade be thrown out?

"I think that's baseball's biggest problem -- is that baseball, more than any other sport, relies on its record book. And now its record book is in shambles," says Bryant.

"The top five home run seasons are all since 1998. Roger Maris' record has been surpassed six times in three years. Barry Bonds is going to have the two most prestigious, important records that the game has to offer. He's going to hit 800 home runs. And what are people going to think about baseball every time they look at those records?"

According to The San Francisco Chronicle, Bonds told a federal grand jury that he unwittingly used what prosecutors say are forms of steroids.

Bonds has not commented publicly on that report, and Canseco says he saw then-teammate Mark McGwire use steroids.

"I've injected him before in the clubhouse," says Canseco of McGwire. "He wouldn't inject me."

McGwire has denied Canseco's allegation, and says he has never used steroids or any illegal substance.

"In two years, baseball writers will see McGwire's name in the Hall of Fame ballots for the first time," says Wallace. "Some writers have told me they simply will not vote for McGwire because they believe that he used steroids. You believe that he did?"

"Mark? No, when I was in Oakland, I had no reason to suspect that he used steroids," says Alderson.

And now that Alderson has moved from Oakland?

"With respect to Mark, that I think is a little unfair. I don't know anything more about Mark since 1998 than you do," says Alderson.

Fair or not, steroids have raised questions, which possibly may never be answered -- not just about McGwire, but about the entire game of baseball.