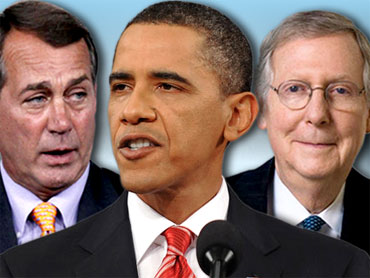 The House Republican leader on Sunday suggested he may be willing to concede to Democrats who want to let the Bush tax cuts lapse for the wealthiest Americans, but the Senate Republican leader today said he is standing his ground.

Senate Minority Leader Mitch McConnell (Ky.) said on the Senate floor today that he is introducing legislation "that ensures that no one in this country will pay higher income taxes next year than they are right now."

Meanwhile, a spokesperson for McConnell said today that every Senate Republican has pledged to oppose any attempt to extend the Bush tax cuts that doesn't include an extension of the tax cuts for the wealthy. McConnell himself has given similar remarks. "That's the kind of debate that unifies my caucus, from Olympia Snowe to Jim DeMint," McConnell said, the Washington Post reports, referring to one of the most moderate and one of the most conservative Senate Republicans.

On the Senate floor today, McConnell said, "Only in Washington could someone propose a tax hike as an antidote to a recession."

The Bush tax cuts are set to expire at the end of the year, and Mr. Obama has strongly urged Congress to extend them for everyone except for Americans making more than $200,000 or households making more than $250,000. Republicans, by contrast have called for a extension of all the tax cuts.

However, House GOP leader John Boehner -- whom the White House has in recent days portrayed as their primary adversary -- said Sunday on CBS' "Face the Nation", "If the only option I have is to vote for some of those tax reductions, I'll vote for it."

Boehner's remarks changed the nature of the showdown over the Bush tax cuts, but McConnell's firm opposition speaks to the challenges that remain for the White House.

President Obama has taken a firm stance on the issue, arguing the nation cannot afford to extend the tax cuts for the wealthy.

"The president does not believe that we should be borrowing $700 billion, most likely from overseas, to extend tax cuts for folks, quite frankly, that weren't asking for them and don't particularly need them," White House Press Secretary Robert Gibbs said on the CBS "Early Show" this morning. The White House has refrained to say whether the president would veto a plan that includes more tax cuts for the wealthy -- saying that they are confident Republicans will come around on the issue.

Furthermore, Boehner's flexibility on the issue complicates the Democrats' midterm election communications strategy -- which portrays the Republicans as the "party of No" -- while shifting pressure to moderate Democrats.

A number of politically vulnerable moderate Democrats in the House have also come out in favor the Republican position. Four House Democrats are currently collecting signatures for a letter they will send to House Democratic leaders this week, Politico reports, urging them to support a tax extension for all Americans, including the wealthy.

One Democrat who supports the Republican position -- Rep. Gerry Connolly -- represents the Northern Virginia district where Mr. Obama will travel today to meet with local families and talk about the economy.

The story was also updated to reflect a correction from the Associated Press. The story originally included an inaccurate AP report that every Republican senator has pledged to filibuster an extension of the Bush tax cuts that does not extend the tax cuts for everyone. The story was amended to clarify that every Republican is opposed to the plan; they have not pledged to filibuster it, however.