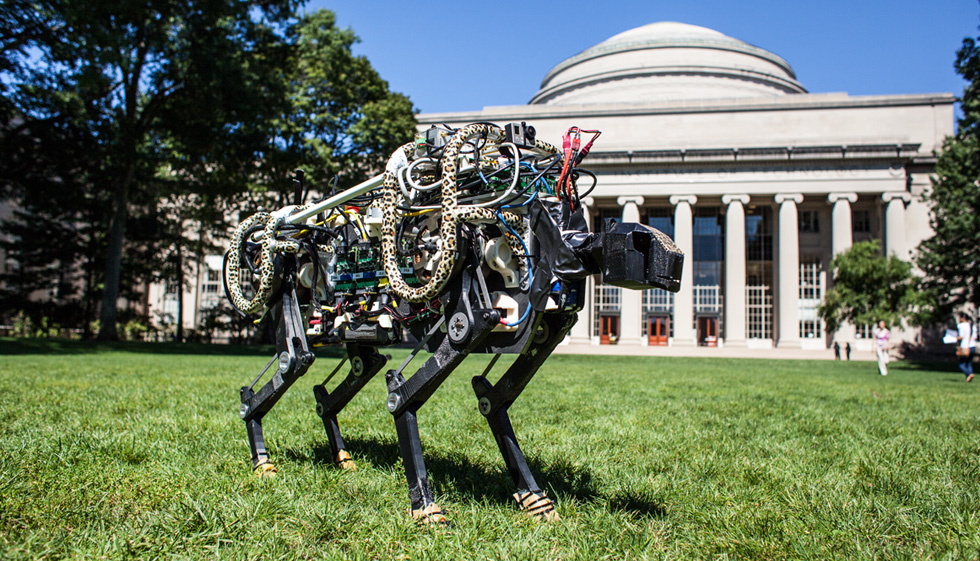 CAMBRIDGE, Mass. -- It's a robot unlike any other: inspired by the world's fastest land animal, controlled by video game technology and packing nifty sensors -- including one used to maneuver drones, satellites and ballistic missiles.

The robot, called the cheetah, can run on batteries at speeds of more than 10 mph, jump about 16 inches high, land safely and continue galloping for at least 15 minutes -- all while using less power than a microwave oven.

It's the creation of researchers at the Massachusetts of Technology, who had to design key elements from scratch because of a lack of or shortcomings in existing technology.

That includes powerful, lightweight motors; electronics that control power for its 12 motors; and an algorithm that determines the amount of force a leg should exert during the split second that it spends on the ground while running -- the key to helping the robot maintain balance and forward momentum. An onboard computer organizes data from various sensors and sends commands to each motor.

"This is kind of a Ferrari in the robotics world, like, we have to put all the expensive components and make it really that instinctive," said MIT professor Sangbae Kim, who leads the school's Biomimetic Robotics Lab that designed the robot. "That's the only way to get that speed."

Insight gleaned from the design of their prototype could have real-world applications, including the design of revolutionary prosthetics, wearable technologies, all-terrain wheelchairs and vehicles that can travel efficiently in rough terrain much like animals do, Kim said. There are hopes the robot will be able to be used in search and rescue operations in hazardous or hostile environments where it's too risky to send a human rescuer.

"When the robot is running, at every step, we calculate the appropriate amount of the force to the legs so that the robot can balance itself," said MIT research scientist Hae-Won Park, who wrote the complex algorithm used to control the cheetah, which weighs around 70 pounds -- about the same as one of its female feline counterparts.

Sensors inside the robot measure the angle of the leg and that information is sent to an onboard computer that also organizes data from the Inertial Measurement Unit, or IMU, which is also used to maneuver drones and ballistic missiles, Park said.

The project is funded by the U.S. Department of Defense's Defense Advanced Research Projects Agency. The military research arm is also funding a similar robot being developed by Boston Dynamics. The company says its version is powered by an off-board hydraulic pump and uses a boom-like device to keep it running in the center of the treadmill.

Researchers had to exercise a lot of patience during test runs. The robot broke dozens of legs manufactured by 3D printers and reinforced with Kevlar strips and carbon fiber.

Strong, lightweight components that made untethered running possible, including a carbon fiber-and-foam sandwich frame that can absorb the forces generated by running and jumping.

Some off-the-shelf components, including an Xbox controller for maneuvering the robot and wireless Internet communications for sending commands to the mechanical cheetah, also came in handy.

Each leg is propelled by three motors that can generate powerful forces at slow speeds.

Still, researchers continue to tweak their prototype, looking to add additional sensors that would eventually make the robot autonomous.

"In the next 10 years, our goal is we are trying to make this robot to save a life," Kim said.