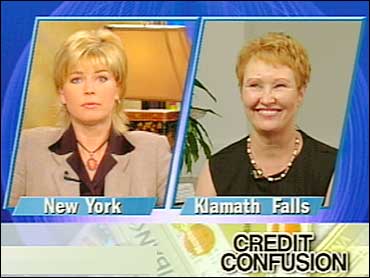 Thomas visited The Early Show to explain how her persistence paid off.

Since 1996, TransUnion had listed the bad debts of Judith L. Upton of Washington state on Thomas' credit reports. Both women have the same birth year, and similar first names. Their social security numbers differ by one digit.

Thomas believes she did everything she was able to do in the last seven years, given the circumstances. She made TransUnion aware of the confusion. Thomas says she did the foot work as best she knew how and that going to court was the last thing on her mind.

She called TransUnion, faxed, sent them documentation, sent them letters from the credit granters corroborating that she was not the person that was credited. Thomas explains that she felt she was at war. There was no place to finish except through litigation

She says TransUnion was not listening to her, which made her angrier. During this time. Thomas' blood pressure went up and she went on antidepressant medication.

Thomas suggests anyone else that might have a dispute with a credit-check agency to do the following:

Follow the dispute process. If that does not work, call the credit granters and keep documentation. She suggests archiving everything you say and do and everything that is said and done to you. She recommends obtaining a good attorney.