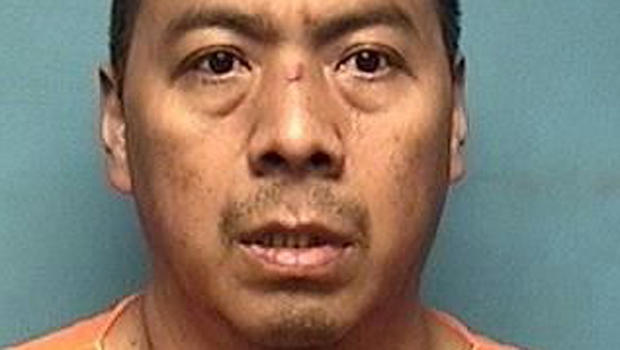 INDEPENDENCE, Mo. -- A Missouri man was charged with murder after two of his three children told teachers at school that he had stabbed their mother to death.

According to court documents, authorities were alerted to the incident and found the woman’s body Monday morning after the children, 8- and 9-year-old boys and a 6-year-old girl, were taken to school by their father.

Vincente Roldan-Marron was charged with first-degree murder in the stabbing death of Yadira Gomez. Roldan-Marron told authorities he blacked out after drinking alcohol and taking pills and couldn’t remember what happened.

The 9-year-old boy told police that his mother and father had argued at their home after going to church on Sunday, CBS Kansas City affiliate KCTV reports. They started to fight, and the boy and the other children went downstairs.

Independence police detectives told the Kansas City Star that the three young children spent the night in the same home as their mother.

“The children were witness to a portion of this,” said Officer Luis Virgil, who is helping the children and their grandparents. “You know that these children just witnessed something that no one would be able to deal with even as adults.”

He said authorities were moved by what the children endured and began filling a candy jar with donations. By Wednesday the police department employees chipped in more than $1,400.

“We saw this big need for the family and kids,” said Virgil. “It kind of tugged at our hearts because of what they witnessed.”

The Independence community also contributed to the family. Best Buy donated three Android tablets for the children. Other donations made to help the family include grocery gift cards, food, clothing, toys, movie passes, new mattresses and money for funeral expenses. The apartment complex also moved the family into a newer and bigger unit.

According to Virgil, the family had recently moved to Independence from New York.