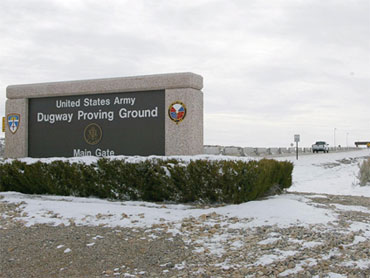 DUGWAY PROVING GROUND, Utah - The Army said Thursday that Dugway Proving Ground, where military weapons are tested, was locked down for hours because a small amount of a nerve agent was unaccounted for.

The amount missing was less than one-fourth of a teaspoon of VX nerve agent, which affects the body's ability to carry messages through the nerves.

Post commander Col. William E. King said the nerve agent was never unsecured but had been incorrectly placed in a mislabeled container after a test on Tuesday at a base lab. The error was detected during a routine inventory check.

"It's an unfortunate oversight but one that we take very seriously," King said at a news conference outside of the base gates in Utah's Skull Valley, about 85 miles southwest of Salt Lake City.

King said he has halted all testing and handling of chemical weapons on the post until an internal review of procedures can be conducted. Staff will also be retrained.

King called for the lockdown at 5:24 p.m. local time Wednesday evening, just as many daytime employees were about to head home, CBS News affiliate KUTV-TV in Salt Lake City reports. The vial was found at 3 a.m. Thursday morning. The lockdown was lifted at 4:15 a.m.

Surveillance camera video from the lab showed no one had access to the vial during the hours it was unaccounted for. The vial was both stored in a secondary container and locked inside a vault, and multiple security systems are in place, King said.

After an initial investigation, King said he believes there was "no malicious intent" on the part of the two base employees who had conducted the tests. However, Army and FBI investigators were still talking with the pair on Thursday to determine what went wrong.

King said he did not yet know whether any disciplinary action would result from their actions.

No one was in danger and the lockdown was ordered as a precaution, King said.

Between 1,200 and 1,400 people were inside the facility at the time. They included military personnel, contractors and civilian workers. About 850 people live on the base.

"All of our employees are safe and there is no damages that I know of," Bonnie Robinson, a post spokeswoman, said Thursday morning.

Dugway is used to test military weapons, but its primary mission is defending troops against biological and chemical attacks.

Encompassing more than 800,000 acres of desert, the post also is used by the U.S. Army Reserves and the U.S. National Guard for maneuver training.

VX is just one of numerous deadly chemicals tested and handled at the base. A persistent chemical agent, VX can be "very deadly" if it makes contact with the skin, but the amount of material in the misplaced vial was so small that only a few people might have been affected, King said.

"VX, normally from a warfare perspective, would be put out in gallons," he said.