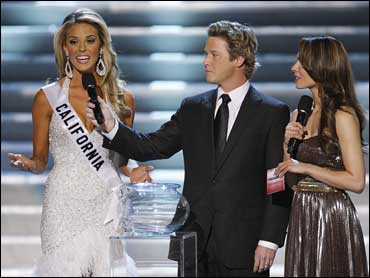 Miss California says she stands by her anti-gay-marriage comments, even if they may have cost her the Miss USA crown.

Carrie Prejean defended her views Tuesday on NBC's "Today" show, telling host Matt Lauer that she spoke from the heart during Sunday's pageant when she said that "marriage should be between a man and a woman."

The beauty queen's response to a question from openly gay pageant judge and celebrity blogger Perez Hilton has received more attention than the winner, Miss North Carolina Kristen Dalton. During the pageant, Hilton asked Prejean if every state should follow Vermont in legalizing same sex marriage.

"I think it's great that Americans are able to choose one or the other," Prejean responded. "But in my country, and in my family, I think that I believe that marriage should be between a man and a woman. No offense to anybody out there, but that's how I was raised."

Hilton, who also appeared on the "Today" show Tuesday, said his question was relevant and that Prejean should have "left her politics and her religion out because Miss USA represents all Americans."

Prejean, who was named first runner-up at the pageant, told Lauer that she knew "at that moment after I'd answered the question, I knew that I was not going to win because of my answer." Still, she stands by her statements.

"I don't take back what I said," she told Lauer, adding that she "had spoken from my heart, from my beliefs and for my God."

Hilton also joined Early Show co-anchor Julie Chen from his computer via Skype along with Miss USA pageant co-director Shanna Moakler, who was in Los Angeles on Tuesday.

When Hilton first heard her answer, he says he was "shocked."

"Because, I thought, having been from California, a state that recently passed Proposition 8, outlawing same-sex marriage, she should have been better prepared to answer that question," he said.

"There were various other ways she could have answered that question, and still stayed true to herself without alienating millions of people," he said.

Hilton gave an example of how he thought she should have handled the question.

"A very simple way she could have answered it is, 'as a future Miss USA, it is my job not to be a politician, but to be someone who represents and inspires the women and the troops, and I think it's great that the states get to decide for themselves.'

Did the question cost her the crown and the title?

"I think she was definitely one of the front-runners," Hilton said. "But I think it's kind of very rude of her to be saying in interviews, like she was yesterday, that if she had been given another question, she would have won. And that she felt like a winner. You know, Miss North Carolina, congratulations to you. She did a great job. She earned that crown."

Moakler, who understands the difficulties that come along with being in a pageant, points out that "this is not the first conservative Christian title holder."

"I have to applaud her that she was willing to miss out on the opportunity of being Miss USA, to stay true to her convictions," she said. "But, on the same token, I think she muddied the waters a little bit by making - just by her question was insensitive. And it's now become more about compassion, being compassionate in the way that she answered her question."

As her state director, Moakler added: "I want it to be known and be clarified that we're not abandoning her and we don't hate her. But it puts us in a difficult situation because we do have a difference of opinion.

"And we also have sponsors, and people that have supported her and helped get her to where she was standing on that stage, that I think there's now become a sense of betrayal. So it's just, you know, that's why I'm saying it's become a topic of sensitivity, and she needed to answer her question with more compassion."