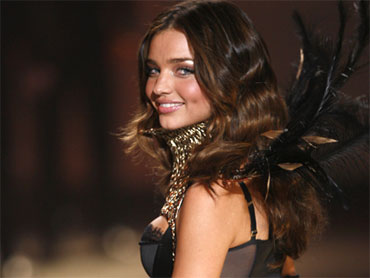 An Australian banker left red-faced when a live TV broadcast showed him looking at scantily clad photos of supermodel Miranda Kerr at work won't lose his job, according to a report on the news Web site news.com.au.

Macquarie Bank worker Dave Kiely was at his desk as a colleague was being interviewed about interest rates when the camera showed him apparently opening e-mail attachments of nearly nude photos of the model.

The clip became a YouTube hit and other media broadcast it during prime-time Tuesday.

According to news.com.au, Macquarie Bank said in a statement released Friday that Kiely would keep his job. The statement also apologized, on behalf of the bank and its employee, for any offense caused to viewers of the broadcast.

Kerr, a 26-year-old Australian-born model engaged to "Pirates of the Caribbean" star Orlando Bloom, said Thursday she hoped the banker would not lose his job.

"I am told there is a petition to save his job, and of course I would sign it," news.com.au quoted her as saying.

The Web site published an article Friday applauding Macquarie, and the success of their own "Save Dave" campaign.