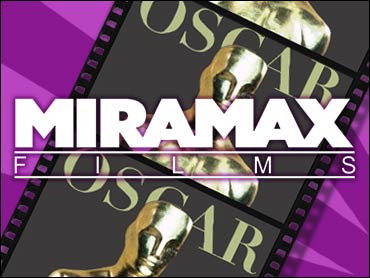 Miramax, whose aggressive strategizing helped heighten Hollywood's awards season to the intensity of a political campaign, once again is dominating the Oscars after a three-year dry spell.

On its own or in partnership with other film companies, Disney-owned Miramax earned a whopping 40 nominations — among them best-picture honors for its solely owned movies "Chicago" and "Gangs of New York," and for "The Hours," which it co-produced with Paramount.

The other best-picture nominees announced Tuesday were "The Lord of the Rings: The Two Towers" and "The Pianist." The Oscars will be presented March 23.

With a leading 13 nominations, "Chicago" could emerge as the first musical to win best picture since 1968's "Oliver!" Other key nominations for "Chicago" include Rob Marshall for best director, Renee Zellweger for best actress, John C. Reilly for supporting actor, and both Catherine-Zeta-Jones and Queen Latifah for supporting actress.

"Gangs of New York" trailed "Chicago" with 10 nominations, including Daniel Day-Lewis for best actor and Martin Scorsese for directing. "The Hours" was next with nine nominations.

Miramax has had at least one best-picture nominee for 11 straight years, but it has not produced a winner since 1998's "Shakespeare in Love." The company's awards resurgence follows three years in which its best-picture contenders — "The Cider House Rules," "Chocolat" and "In the Bedroom" — were of the just-happy-to-be-nominated variety.

"The movie business is cyclical — thankfully, this is one of those good years," Harvey Weinstein, co-chairman of Miramax, said in a prepared statement.

Weinstein, who masterminded successful awards campaigns for "Shakespeare in Love" and 1996 best-picture winner "The English Patient," declined an interview request through a company spokesman.

Miramax, founded by Weinstein and brother Bob and later bought by Disney, turned Oscar campaigning into an art in the mid to late 1990s, pouring millions of dollars into special screenings, ads in Hollywood trade papers and other marketing efforts aimed at awards voters. Rival studios felt compelled to do the same to keep up with the Weinsteins.

"They turned Oscar campaigning into Oscar blitzkrieg, all because of the gold lust of Harvey Weinstein, who takes ballyhoo to a whole new level. Almost to a P.T. Barnum level," said Tom O'Neil, author of the book "Movie Awards." "His hunger and lust after this award feeds the competitive spirit of the rest of Hollywood."

That can be especially important for sobering stories such as the Virginia Woolf-related drama "The Hours" or the Holocaust saga "The Pianist," which lack the huge marketing budgets of a blockbuster franchise like "The Lord of the Rings."

"In the end, any awards the film gets are an advantage," said Nicole Kidman, a best-actress nominee for playing Woolf in "The Hours." "More people out there are hopefully going to see this film because of it."

Along with Kidman, Zellweger and Day-Lewis, Miramax can count Salma Hayek and Michael Caine among its lead-actor nominees. Hayek earned a best-actress nomination for the title role in "Frida," a film biography of painter Frida Kahlo, while Caine was nominated for best actor for the 1950s Vietnam drama "The Quiet American."

Also earning best-actor nominations were Adrien Brody for "The Pianist," Nicolas Cage for the twisted Hollywood tale "Adaptation" and Jack Nicholson for the road-trip dark comedy "About Schmidt."

Other best-actress contenders are Diane Lane for the adultery thriller "Unfaithful" and Julianne Moore for the 1950s melodrama "Far From Heaven."

Moore also received a supporting-actress nomination for "The Hours." Along with Zeta-Jones and Queen Latifah, Moore is up against Kathy Bates for "About Schmidt" and Meryl Streep for "Adaptation."

That makes two-time Oscar winner Streep the most-nominated actor ever, with 13. She had been tied with Katharine Hepburn at 12. Streep was shut out on a lead-actress nomination for "The Hours," however.

Also snubbed were "Chicago" lead actor Richard Gere and "The Two Towers" director Peter Jackson, who had scored a directing nomination last year for the fantasy trilogy's first installment, "The Fellowship of the Ring."

Joining Scorsese and Marshall in the directing category were Pedro Almodovar, a surprise nominee for the Spanish-language film "Talk to Her"; Stephen Daldry for "The Hours"; and Roman Polanski for "The Pianist." Polanski is a fugitive from the United States for having unlawful sex with a 13-year-old girl in 1977.

Miramax's Oscar success leaves the company competing with itself in many categories. While Weinstein is certain to make a show of support for all his nominees, he may feel compelled to make his biggest push for "Chicago," feeling it might have the strongest chance of winning best picture.

Scorsese, who had a much-publicized feud with Weinstein over the final cut on "Gangs of New York," said he has not yet talked to the Miramax boss about positioning his film for the final run-up to the Oscars.

"I think he'll try to do it as fairly as possible," Scorsese said. "Certainly, I will talk to Harvey about it, just as I'm sure the people from 'Chicago' will talk to him about 'Gangs.'"