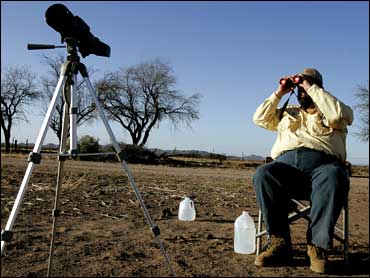 Minuteman volunteers concerned about the continued flow of illegal immigrants across the border from Mexico gathered Saturday with lawn chairs, binoculars and cell phones for a new monthlong campaign aimed at raising public awareness.

A year after their first watch-and-report operation along the border in southeastern Arizona, members of the Minuteman Civil Defense Corps embarked on a much larger effort in this state's busy migrant-smuggling corridor.

"I'm concerned about what's not being done by the government, hasn't been done for ages, apparently," said J. Glenn Sorensen, a retired school administrator now living in Flagstaff.

Sorensen, who was not involved last year, said he thinks the organization has already accomplished part of its purpose, "to draw national attention to an insecure border. I don't think anybody wants to close the border, I certainly don't. Basically, I think they need to be secure."

Meanwhile, the Senate continues to debate an immigration bill that includes a guest worker program. The version that passed the Republican-controlled House late last year took a get-tough approach — calling for more fences along the border and tougher penalties for those who sneak across — and did not create the guest worker program that Mr. Bush wants.

Speaking on Face The Nation Sunday, Rep. James Sensenbrenner, R-Wis., was pressed about the usefulness of erecting a 700-mile fence similar to the one proposed by the House bill on immigration he sponsored.

said the fence would cost nearly $2 billion
. The congressman said, "There will be a physical barrier built where it's appropriate. But in other places, there can be a virtual fence, which includes high tech electronic devices, drone planes and stuff like that."

Sensenbrenner then told Face The Nation host Bob Schieffer he thought the Mexican government was to blame for the U.S.'s leaky border. "If they had helped, we wouldn't need these types of barriers. But I think they're kind of on the other side," he said.

None of the Minutemen interviewed had any illusions about their campaign's effectiveness, since it targets a relatively short section of the border for just a month. However, it comes at a time when Congress is debating changes to federal immigration laws, which have drawn supporters of legitimizing illegal immigrants to demonstrations across the country.

"This is like sticking a finger in the dike," said Ken Raymond, a retired electrical engineer and airplane mechanic from Tucson.

Yet some immigrants were apprehended. Minutemen volunteers in New Mexico alerted the Border Patrol to a group of immigrants Saturday.

"We hadn't been on the line more than 30 minutes when we spotted our first group of seven," said Bob Wright, director of the state's Minuteman group.

Don Goldwater, a Republican candidate for Arizona governor, said he had a message for President Bush.

"Build us that wall, now!" Goldwater said, referring to a measure that would add 700 miles of fences along the border. He promised that if elected, he would put illegal immigrants in a tent city on the border and use their labor to build the wall. Goldwater is a nephew of the late Sen. Barry Goldwater.

Each month, thousands of illegal immigrants cross into Arizona. Since Oct. 1, agents have caught more than 48,000 in the area staked out this weekend, up 53 percent from the same period a year earlier.

Chris Simcox, the Minuteman group's national leader, said four watering stations placed by the group Humane Borders to keep migrants from dying in the desert will be among the sites under surveillance. Last year, more than 400 people died trying to cross the desert, many from dehydration or heat exposure, according to the Border Patrol.

"We watch them all the time," Simcox said of the water stations. "It's a great place to report illegal activities."

The Minutemen arriving south of Tucson plan to patrol private ranch property about 30 miles north of the border.

The group says it plans similar exercises along the border in California, New Mexico and Texas, and along the Canadian border in Washington, New Hampshire, Vermont and New York state.

In Sumas, Wash., about 150 Minuteman volunteers were keeping watch Saturday.

"We're going to be running posts both day and night," said chapter organizer Claude LeBas, whose 10-acre farm was the staging area.

Along with binoculars, cell phones and radios, a number in Arizona wore sidearms, including state Rep. Russell Pearce, a Republican and a leading voice in the Legislature calling for a crackdown on illegal immigrants.

Those planning to patrol were under strict orders to call the Border Patrol and to avoid confronting intruders or drawing their weapons, said Simcox and Stacey O'Connell, in charge of the Arizona chapter.

Although last year's patrols were nonviolent and disciplined, there are still concerns about having armed groups in a busy trafficking area, Border Patrol spokesman Gus Soto said last week.

Weapons are not part of the Northwest campaign, said LeBas, a retired U.S. Customs agent.

Minuteman leaders have said that all the group's members have been screened to weed out members of racist organizations.